This post has been published by me as a part of the Blog-a-Ton 12; the twelfth edition of the online marathon of Bloggers; where we decide and we write. To be part of the next edition, visit and start following Blog-a-Ton.

No-one in the history of human civilization was in such a big mess. I mean no one. 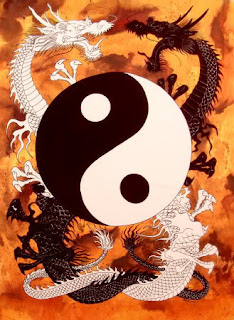 On my left is Shankar, the Godfather, the uncrowned ruler of the dirty streets of Mumbai. He fights for greed, for the right to rule. He is holding a desert eagle Mark XIX with a .44 Magnum catridge, fully loaded and safety latch unlocked.

On my right is Mahadev, the jewel on the crown of Mumbai Police Encounter Squad. The unquestioned top-brass encounter specialist of the special crimes unit. He fights for law, for the justice and against crime. He is pointing a semi-automatic Smith & Wesson MP 9 with a .45 ACP bullet, the trigger partially depressed and ready to be pressed completely.

In Summary: On my left stands a man who can blast off my skull and on my right is a man who can make a see-through hole in my thick skull, unless, I come up with some efficient solution in the next 60 seconds.

They both are surprisingly silent and are simply staring at each other.

Time has froze to help me make my decision, but which is it? I look around bedazzled at the frozen people around me, I hold the key position in sorting this mess and bringing things back to normal.

I feared that to things become normal, someone has to die. I am completely responsible for today standoff, it was my mistake that it has come to this now.

Shankar and Mahadev were twins born to the same parents. Their parents were victims of a collateral damage in a bank heist and then were raised by their elder brother, Mahesh, my father.

They carried an unspoken feud between them since their parents died, both very young when the tragedy happened and both tried to cope up with the loss in different ways.

They finally parted ways with the death of their elder brother, who died under mysterious circumstances, three years ago. Mahadev blames Shankar for the death and wants revenge. Shankar believes that the corrupt police officers killed his brother.

'Your uncle represents the sins of humanity,' my mother had explained me, 'It is the sins that is driving them and making them work, Shankar is motivated by greed and vengeance, while Mahadev is motivated by anger. You stand the key to where they are standing today and you alone hold the pivot on which this balance of the good and evil rest.'

'But I don't want to choose between them, I do not know what to do.'

I do not know what to do.

'You killed your own brother,' Mahadev replied. 'I am repeating again and again, I did not kill him, but you, thanks to your meddling, you have killed almost all of my men,'

Shankar shouted, 'And for that you die.'

'What is there to stop? Crime never stops, the cities are drowning in crime. The world is sinking under its weight, we are not pushing the guilty because they are innocent until proven wrong, this is the biggest flaw of the system. My parents were killed in one such crime spree, so were his, but he has moved on it seems....,'

Mahadev replied angrily. 'Crime will never cease to exist, crime is as old as the society itself. It is the pathetic attempt of people like you who try to tame the wild world. Criminals run the street, unchecked by any, but they stand by honor, respect and many other things you people will never understand. Our parents died because they were poor, they were law abiding citizens. They were nobody and hence they had to die. Crime has to pay to the society, but the society was forced on us, we never wanted to be the part of your society'

The moment is close, I sense it. I now now, what to do, but the question is, am I capable of doing it?

After my father died, Uncle Mahadev took me and my mother under his care. He raised me as his own son, and never ever forced his dark empire on me. I was to choose the way I want. Uncle Shankar wanted a mole in his crime world, and I agreed. The deal was, Uncle Mahadev would not get hurt. I now know whom to address first...

'Uncle Shankar, I sense your heart, I know you are angry and it is the right response for the crimes, but... I know, in your heart, it is not the anger that drives you....' I could sense it working, the hand on the trigger shivered. '...it is hope that motivates you. Hope that the streets will be clean of all the crimes. Hope that justice will prevail. Right now, you don't want him dead out of justice, you want him dead out of revenge. You have taught me uncle, revenge does not pay. Justice is more than revenge,'

The spirit that had taken over the mind slowly vanishes, bright sunshine peeps out of the clouds.

'So that is your wish then,' Mahadev answered, 'You choose him over me?'

'No, I choose, the family, our family,' I play a big gamble hoping for my life, 'We all are family. There was someone who went the road, you went, uncle. He drifted away from the family and walked the coals, he never shared his dark secrets with you or anyone and that grief consumed him....'

The hand twitched. '... he could not live the dual life, the life in fear, the life of greed.'

Both of them are looking at me now. '...He was my father, your elder brother. He was not killed, he committed suicide'

The truth that split upon a family, was finally out there in the air. I think I succeeded in preventing my own death today.

'He committed suicide?' uncle Shankar asked. 'Yes, he lived a double life, one that was deeply rooted in the crime world. He hated it. His last dying wish was you too forgetting your feud and coming back together.'

I handed over the sad document I carried with me for last three years, the final testimony of my father. It was over hopefully. My father's last dying wish was fulfilled. The twins spoke nothing, simply turned and walked away. But as they walked out of the door I could hear a distant click of a bullet getting loaded into the barrel.

P.s. To be continued?

P.p.s. My second graphic entry from a new cartoon blog. Its funny and not as long as this one. Read it.