November 11, 2012
There are two types of festival, one is social media festival where you receive a flood of social media messages and SMS with a awkward silence. 17 email forward with 70 people in reply to all, 5 SMS (because they are charged extra), 144 friends posted on Facebook about the festival. No tweets thankfully or maybe tweets get buried under other tweets (no complaints there).

Social media festivals are secular and geographically diverse. People sitting in Bangalore will freely wish their friends in India a "happy Halloween" without fail. There will be a flood of 'Happy Id' and 'Happy Duserra' posts from all the people irrespective of religious background.


The intensity of social media festival will increase with the proximity of it appearing near a weekend. Friday and Monday holidays are more welcome, next in line comes a Wednesday holiday its a welcome break in the middle of week but Thursday and Tuesday holidays are partially dreaded. Facing Monday before a holiday is worst.

Some festivals bring with it strangeness along with it. A few days ago me and my colleagues were going for lunch outside the office. As the normal office rule goes, the unhygienic stall outside the office will always serve tasty food than the office canteen. We were walking peacefully at the prospect of today's special vegetable at the food stall when Gupta paused right in the middle of the street and turned around.

Did his micromanager (the one in office who keeps track of how many times you go to the loo) finally figure out a way to telepathically send him signals?
Whatever the reason, he sprinted in the opposite direction. Ten minutes later when we were busy digging into usal pav, he came from other end. That man had done the same thing Columbus did in search for India. Travel from the west and reached east. He had completed a complete circle around the office to reach our stall. When we asked why, he explained that it was navratra in his town (9 days of Goddess worship) and during that period he avoids any path that has a non-veg restaurant in the way as the smell may spoil his festival. 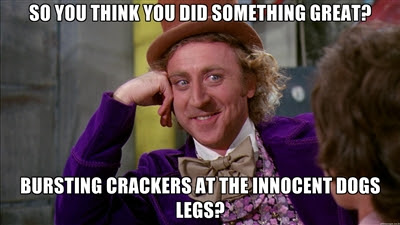 Out of the many festivals in India, the most controversial one is Diwali. There is no harm and foul in celebrating a festival of lights and it looks real amazing to see whole city lit up. However, Diwali with itself brings a lot of fireworks, odd behavior and unexpected guests. Every frustrated, harassed and trouble person in this great nation gets his one chance of 'freaking' out at the expense of some poor souls on the street. They will exhibit behavior that is usually seen in psychopaths and sociopaths by using Diwali as an excuse to trouble dogs, neighbors and in general spoil environment.
Relatives will turn up at your doorstep as if it is their birthright to enjoy your hospitality in exchange of a Cabdury celebrations pack or a Haldirams gift pack. The festival of Diwali is celebrated in remembrance of the return of King Ram from a long weary battle in Lanka. Funny thing is, he never used so much fire power in the battle in Lanka that is used in these five days. However, the main reason  why these crackers are bursted is not the happiness of kings return but peoples own frustration over their unincreased salary, no Diwali bonus and unemployment.

When office colleagues asked Mani Padma what is Karwa Chaut (festival where wifes are supposed to worship Husbands, yes festivals are crazy) she gleefully replied, "Devils worship." No one was pleased.

Festivals are too many and change region to region. Every 200 kms far the dates of festival changes along with its tradition. When foreign MNCs open up their Indian branches they had a exceeding headache trying to 'merge' as diverse holidays as they can without 'hurting' religious sentiments. Obviously 'religious' sentiments are hurt, specially when we don't get holidays that are on Monday and Friday.

And finally we love to celebrate these holidays, getting a paid time off to spend the day lazing around, gluttonously relishing on the sweets that are allegedly prepared for someone else other than you. Meet long lost friends, relatives and write a blog post at their expense (having known that they will never read it, especially, when you ask them to read it) and watch stupid flicks on television that make no sense or you have watched for like a dozen times but will still watch because television remote is out of your reach.

Because thats what life is, all you have to work is from one festival holiday to another. Enjoy the long weekend of Diwali while you can.

Happy Holidays or Diwali or whatever.