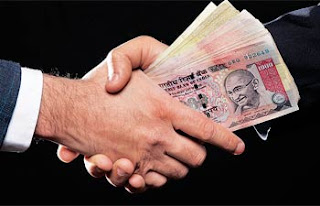 According to the blog in Washington post, racism in India is very prevalent. You can see the blood red colored India very prominent on the map. This story was just mentioned as a passing remark over a coffee table with a smirk, 'Yeah its India, no one cares about race, but they do care about is caste'.

It is extremely true about caste system prevalent in India even after almost fifty years of Independence. People still considered other people from schedule tribes and caste as dirty or disgusting. Reservations in education, jobs and by some unconfirmed election butter promotions, has added more to this feud. The number of people who hate other people based on their caste has definitely increased ten fold in the last fifty years. Earlier it was based on some ambiguous religious text, now it is based on medical seat availability.

In a normal world any political party getting riddled in scandals popping up faster than rabbits can make babies, will lose the local elections but Karnataka proved this wrong. How did Congress win the Karnataka polls is a question more important than the question of Doctor Who? Some say minority appeasement, some say it was prejudice against ruling BJP.

See, Congress winning the election is definitely not the problem, no, India is a country of 1.2 billion people. Having 400 corrupt and snake oils salesmen in this grand country is not a big deal, having a billions of corrupt money is also not that a big problem.
The biggest problem cropping this country, sitting there on the border of everything. A thin shade of gray living on the edge of everything.

The real problem is, this 1.2 billion people do not want to stay with each other. They refuse the acknowledge the fact that we are into this together. We all are miserable, we all are in deep trouble. See, here is the problem, most of these 1.2 billion people are trying to sink others boat. They say they are chosen, giving arbitrary reasons like caste, religion, race or birthplace. The problem is, there is only one boat.

We all started together and we are journeying in the same boat.

It is the boat that is sinking. Sinking deep into abyss, sinking without faith, sinking without life guard. The government is struggling hard to stop the ship from sinking, yes they are, but are incapable of doing so. Here is the biggest trouble of our times, it is not that we do not have better politicians, it is just that we don't want to believe in those.

God is bleeding, faith is collapsing. Faith in the republic of India is sinking and along with it blood gushing out from the minds of people. When there is blood in the water, sharks gather for dinner. Its a full feast for all sorts of sharks gluttony, greedy and gross sharks. The country is headed towards a boiler plate, tolerance levels are falling below acceptable.

The founding fathers knew this, they realized this. They used the medium of television to pass on the message. 'Mile sur mera tumhara' the song that is known by heart to every kid born before the year 2k. The song is still etched in our minds and most of you are singing it in tune right now. But here is the thing, there is no unity in diversity left in this country anymore.

The warning signs are all there. People want to be superior to each other using the same colonial mindset that  gave Indians massive inferiority complex for almost 150 years.

Unity is collapsing, don't act surprised if North Indian boys are booted from a shared auto in Chennai to give seat for locals because that should be normal. Unity is hanging by a thin hairline thread, the whole nation is still surprised when accusations of spot fixing riddled their favorite religion of cricket. They mourn together when their favorite thing is riddled in scandals. Because if not for cricket, the thoughts come back. The colonial mindset kicks in, they cannot sit next to each other.

We are into this boat together, and whatever anyone may say, this is a one big circus, going somewhere. How many will reach there only time till tell.