[Short Story] Add a little drama to your death

August 22, 2013
It was over, truly over. Everything that was anything was gone. His life was gone. There was no hope at all. Aditya Singhal had given up on his life. As his legs walked towards the infamous suicide point, he kept murmuring to himself, 'It is over.' 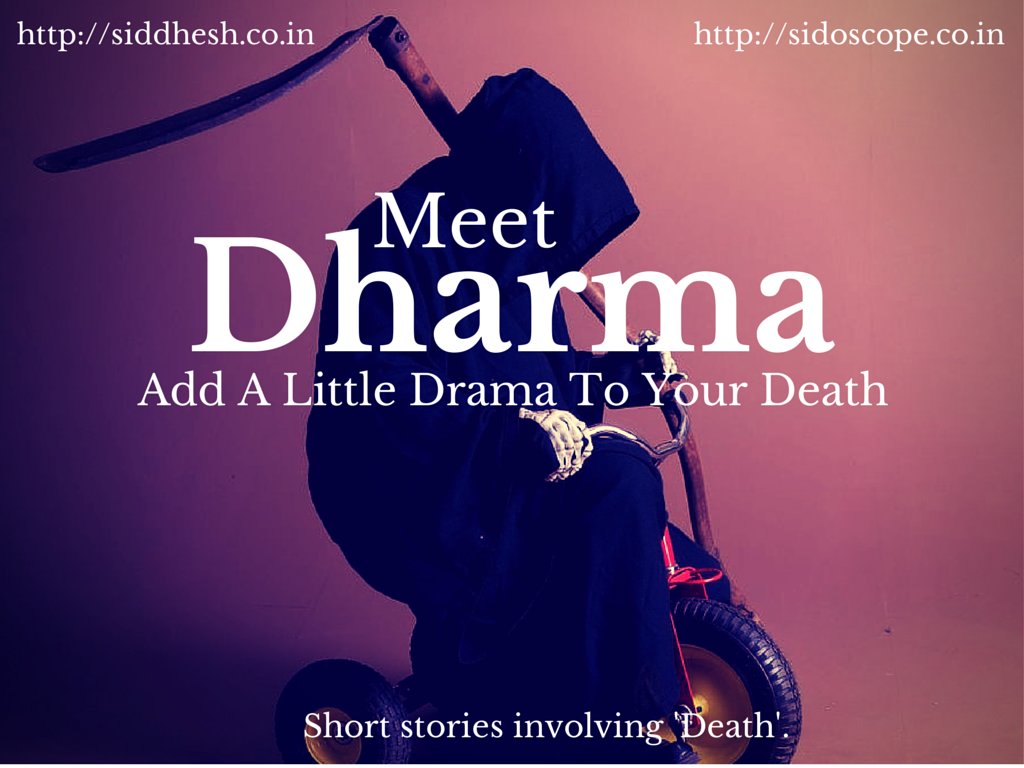 Aditya Singhal led a very fulfilling life. Born to the politically powerful Singhal family with a silver spoon in his mouth. The Singhals were very close to a very famous family ruling the country more than 20 years. Aditya enjoyed a very good, lazy and egoistic life. His tables turned when his powerful father died of an heart attack leaving him a butt load of wealth but very less knowledge of how to use it.

The decline of Aditya Singhal was followed religiously in daily news paper. Right from his scandalous marriage to his deadly narcotics addiction. It took three years for Aditya leg to drag him to the suicide point hitting a new low in his life.

This will be news fodder for another four days and then over. He stepped closer at the edge of the mountain and took a deep breath.

"Quite a strange place to do breathing exercise," the voice spoke to him.
Aditya turned around to find a man sitting at the edge of the suicide point with his legs dangling in the air. The man wore a winter jacket even though it was a summer day. He had short uncombed hair and a plain black jeans completed his attire.

"Excuse me," Aditya replied, "I am about to die."
"Oh sorry," the man said, "Go on continue."
Aditya took a deep breath and looked in the chasm below.
"You know," the man spoke again, "It will be much easier to just jump than to look."
“who asked your opinion?” asked Aditya.
“Sorry,” the man said, “I was just helping you, anyways continue I won’t disturb you.”
Aditya murmured something under his breath and looked below. The valley was deep, Ok looking below was a bad idea. He took a deep breath and looked up. As the minutes went by the idea was turning bad.

“Why did you come up with such a bad idea?” the man asked.
“Listen,” screamed Aditya, “I do not remember asking you for an opinion, neither am I disturbing you in...” he looked at the man, “...whatever you are doing. What are you doing here by the way?”
“Me? I just like to come here for the view,” the man said, “I am on a break. I love this place.”
“This is a suicide point, people kill themself on this cliff every week,” Aditya said wondering why would someone like this place, “This place stinks of death and murk.”
“I know,” the man beamed, “That’s why I like this place. No stupid optimism, no meaningless pursuit of capitalism, no hope of survival and no chance of living. One jump and you are on the other side.”
“Man, thats depressing,” Aditya sat on the edge of the cliff, “Thats really, really depressing.”
“Oh well,” the man said, “Thats death for you.”
“I had a good life you know,” Aditya began, “I was born with golden spoon and lots of money,” he took a deep breath, “I lost it all one by one. First was the money.”
“Ah, money,” the man smiled, “The biggest parasite in the world. I don’t like it very much.”
“Its too late for that. Money has gnawed me completely. I lost the one I loved, I lost my friends, I turned my back to my family and now I am all alone, with no money, no respect and this lousy life.”
“Ah, Life,” the man said, “the worst sexually transmitted disease out there.”
“I am such a lousy person, I can’t even die properly.”
“But you don’t have to die for these petty issues,” the man said, “So what you are poor now or that you have lost your friends. Those friends were never your friends, the love was bullshit. It is a good start anybody can get in his life. Why do you want to checkout so easily?”
“I...” Aditya stammered, “...Why are you wearing that heavy woolen jacket its sweating hot here?”
“Never let anyone dictate what you have to do,” the man said, “Not even the weather. Don’t change the topic.”
“I am useless,” Aditya said, “I have no ambition, I have no skills and I have never done any work in my whole life. I am useless.”
The man put hand inside his jacket pocket and pulled out a bottle of whiskey.
“Take a sip,” he said, “In my entire life, I have never met a single person who is useless. We all have our purposes, we all have our mission. You may think your life is useless but not for all. You have just not found the purpose in your life and thats ok, you just have to strive hard, keep looking. Sooner or later you are going to find that purpose. Till that time...,” he took the whiskey bottle, “...You keep looking.”
“You are right man,” exclaimed Aditya, “I get a fresh start on life. Thank you, thank you very much.”
“My pleasure,” smiled the man.
Aditya walked down the cliff, yeah, he thought to himself, yeah, the man was right, whoever that was. Aditya was rude not asking who the man was. He should go back and thank the man but he already thanked the man didn’t he? He should thank more...
With a renewed spirit he turned back to the cliff excited to talk more about life. The man was not there.
“Hello?” he exclaimed, “hello anyone here?”
Did the man jump? Was he here to commit suicide after all? He should have stopped the man who saved his life. So selfish of you, Aditya, after all these years, after all these years, you are still...
Growl.
A tigers growl made him turn around. He found himself staring in the eyes of three hungry tigers walking towards him. Stress on three. Stress on hungry. He put a step behind and realized he was standing at the edge of the cliff. There was no behind. Loose soil slipped under his legs and fell in the big chasm below.

He closed his eyes tightly as the tigers leaped on him.

"Well that was fun," the man was standing at the corner of the cliff, "Wasn't it?"
"What... what?" Aditya exclaimed, how did he survive the tigers?
"You didn't," the man said.
"What I didn't?" asked Aditya.
"You didn't survive the tigers," the man shrugged, "No seriously that was like 101 of death, you stand on the cliff facing three hungry man eating tigers. There is no moral to that story also. Its naked display of..."
"What?"
"Death..." the man grinned, "So anyways, welcome to the other side."
"Other side?"
"Other side of life, you are dead mister," the man said, "And allow me to introduce, I am Death."
"I am dead?" Aditya asked, "You are death? But... but... you saved me?"
"Oh c'mon," Death grinned, "I did not save you, what was fun in that? I wanted a much better dramatic death for you. Three tigers on a suicide point, that was dramatic wasn't it?"
"You are sick, man, a sadist."
"And here I thought we were friends, " death said, "Tsk, I am merely making my boring, mundane job interesting," a clock on his arm buzzed to life, "Well duty calls. Time for the judgement day."

Poof. They both vanished out of the blue.

Aditya Singhal's body was never found, actually no one bothered looking for him once they came to know he had nothing left. Legally he was declared dead in seven days of absence.