December 11, 2015
I received a request to write a story on the ever loving Krishna and I chose this. There are lot of things already said about Krishna, the controversial warrior-poet. He was a great leader, strategist and orator but he rarely drew the following like his predecessor Ram. He was cunning, manipulative and a fierce lover and a lot has been said about him in mainstream storytelling. But what happened in his enemies mind? How did other warriors saw him? Everyone feared him, some worshipped him, some hated him but no one could ignore him.
This story is entirely fictional and creative adoption from the text of Jaya, that describes the Kurushetra war in detail. 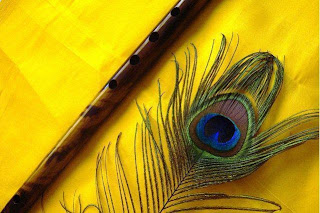 "We need to talk," Bhishma walked into the war room unannounced. No one had dared disrespect Duryodhana before in his own war room but this was Bhishma.

"I gather you got my message?" Duryodhana asked, "Come."

Bhishma looked at the audience that was gathered in the war room. Sitting in the circle were Duryodhana, Dushashana the two sons of Drutarashtra, to their left sat Dronacharya, the brahmin-warrior and his son Ashwathama, the evil king Jayandratha, the chiranjivi Kripa, the moral sworn enemy of Krishna, Kritavarma and finally, the slippery tongue Shakuni.

"You have quite a support group here," Bhishma said, "Duryodhana. What is the meaning of this?"
"We are at war, grandfather," Duryodhana said, "You heard them? This war is important for the Kuru clan. We have to win or the house of kuru will be gone in the hands of traitors and gamblers."

"Is that why you have send for me?" Bhishma asked.
"Who else than the master strategian to lead our vast army? We are preparing 11 akshauhini, all led by the admirable warriors and leaders of our time," Duryodhana pointed to the gathered people, "We need the greatest kshatriya there is to led us."

"Don't," Bhishma screamed, "Don't drag me into this. I do not want to take any sides in this petty feud. You are as dear to me as Bhima."
"Yes," Duryodhana said, "I knew that but I did not ask you about your personal opinions... grandfather. I merely ask you will you defend the kuru clan and the kingdom of hastinapura from external forces?"
"Don't," Bhishma said and took a deep breath, "It is my duty to protect this kingdom from its external forces..." he glanced at Shakuni, "...and internal. It is the code of a kshatriya warrior to not run away from a fight and I will fight."
Duryodhana grinned. With Karna and Bhishma fighting together, there was no chance for Pandavas to win.

"I will fight your battle Duryodhana," Bhishma said, "But do not make this the battle of the kingdom. I will fight with you but I will do it on my terms and you do not order me."

"Please grandfather," Duryodhana said, "I am your humble servant. Help us form the strategy."
Bhishma looked at the papers spread on the table. He studied them carefully and then looked at Jayandratha in horror, "This..."
"Yes, it was my idea," Jayandratha grinned, "The ultimate battle formation, the chakravyuva."
"This is a murder machine," Bhishma exclaimed, "You..." he looked at Dronacharya, "You approve of this?"
"I have to say it is ethically questionable," Dronacharya said, "But it can gain results."
"I do not care about the outcome," Bhishma got up from the table, "If you want me to lead this army, I have few rules..."
Duryodhana was annoyed at the sentence but he needed Bhishma on his side. The Pandavas were brave but they would never fight against Bhishma. He needed Bhishma.
"First rule," Bhishma said putting a feet down, "I am not going to be part of this murder. I won't use chakra vyuva till I lead the army."
"Second rule, I will lead the armies against the Pandava army only. I will not harm any of the Kaunteya."
"But..." Duryodhana exclaimed.
"This is how it will be," Bhishma said, "If you want me to lead your army, these are my rules."
"Fine," Duryodhana said giving in to the conditions.
"Good," Bhishma said, "So now then, give up these stupid murderous and barbaric plan and listen to some sound strategy. First," he pointed at Karna, "You will not battle while I am in the ground."
"This is unfair," Karna screamed.
"For these reasons only," Bhishma said, "You will not listen to my command and you also know that. You are way too powerful, almost my equal. If something happens to me, you can still win the war for Duryodhana."
"But father..." Duryodhana began.
"If we both are in the ground," Bhishma said, "We won't have a good chain of command, which is imperative for the battle," he glanced at Dronacharya. Dronacharya bowed his head, "Karna is valuable and learn to use your wild cards properly. Others are expendables."
"Second, I hear Krishna is in Hastinapura staying at Viduras house," Bhishma said.
"I know," Duryodhana said, "That milkman is in town to discuss peace. He has requested attendance tomorrow in full court."

"Good," Bhishma said, "This gives you a strategic advantage. If you cannot sign the peace treaty with him atleast treat him with respect and invite him for royal dinner tonight. We want Him on our side."

"Him!" Kritavarma exclaimed, "That milkman from the villages is not the leader of Yadav, not my leader. I can get you the yadava army to command, I have already gathered most of them on our side."

"You are a fool," Bhishma said to Duryodhana, completely ignoring Kritavarma, "to call that man only a milkman. He is the biggest strategist in the whole world, a brilliant leader and sound orator. He commands the greatest army of warriors called Narayani Sena but that army is not important. That Man can command a group of monkeys to bring down an entire civilization. Some people call him God, he can steer your way into the battle only by guiding your chariot. Whoever side he decides to choose, automatically wins the war," Bhishma said, "And as far as this murderous plan of your," he glanced at Jayandratha, "Krishna can break open the Chakravyuva too."

"Fine," Duryodhana said, "I will invite the milkman in the royal house. I will treat him like he was never treated before. He will dine with the royals today. I will get the Narayani Sena on our side."
"Do not act like a fool," Bhisma said, "We do not need his army, we need Him on our side. Duryodhan, if you want to win this battle you will listen to what I say."
"I have listened to you," Duryodhan replied, "It is your duty to lead the war and I respect your experience but do not forget, Bhishma Pitahma, I am still the king of this kingdom and I will expect the respect a king deserves. So do not tell me on how should I treat my guests, I will be talking to him on your request."

Duryodhana stormed out of the place followed by his commanders.

Only Dronacharya remained behind, "You knew," Dronacharya said, "Having Karna on the battlefield will give us a strong advantage. You do not wish to fight them do you?"
Bhishma smiled at the old teacher, "I wished for a lot of things, Dronacharya, but I do not wish to fight an unfair battle. Karna is powerful than all of us together, he will be valuable for you when I am defeated..." Dronacharya tried to speak, "Do not disturb me... when I am defeated, Pandavas will get an unfair advantage over Kauravas. Use Karna to level that advantage, give Duryodhana the fighting chance. Use your murderous plan to your advantage. I will be defeated, Dronacharya, for I am fighting against the Dharma but I am duty bound to this land. Kaurava army will be helpless them, do your duty Dronacharya, guide the Kauravas towards moksha."

"Only today's invitation will decide on whose side dharma is on," Dronacharya sighed, "Only He will decide."

Duryodhana did send the invitation to Krishna who politely refused to dine with the king. Enraged by this disrespect Duryodhana would have Krishna arrested in the court next morning. Krishna will escape and that singular moment will change the course of entire battle as we know it.

Karna will enter the battle after the defeat of Bhishma and Dronacharya will implement Chakravyuva. Abhimanyu would be killed trying to break the formation and enraged Arjun will hunt down Jayandratha to avenge the blood of his son.