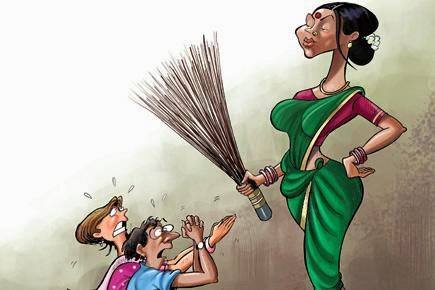 It was one of those weeks in my house when me and my partner were too lazed out to go grocery shopping. Every passing day the number of onion, tomatoes started depleting and we were slowly entering the dark era. Our maid gave a constant reminder of the upcoming apocolypse but since it was morning 7:30, a time before we normally wake up, all those warnings fell on deaf ears nay on sleepy deaf ears.

Finally, one fine day making a very inaudible noise she walked towards us and declared that the end of the world was here and she could not cook anything. At that precise moment, my mind went into a self-doubt mode on exactly who was the employee and who was the employeer. But this was not the first time my mind went into the overdrive of self doubt.

A few weeks back when my wife had gone to her native, our doorbell rang horribly for five to six times distrubing my sweet dreams of world domination. The people had almost started worshipping me in my dream when the doorbell kicked me out of the giant podium and I had to relunctantly open the door,
"Where were you?" asked the maid as she took charge of the house.
"I...ugh... sleeping," I said still yawning, I do not know if there any other possible response at 6:30 in the morning.
"So late in opening the door, were you out again last night?" she asked.
For a freaking moment, I thought I was still asleep and this was my wife enquiring about my whereabouts. I opened by eyes wide but no, it was the maid.
"Ugh... I..." in one freighting moment I had forgotten the entire voccabulary of Hindi.

"Can you come a bit late from tomorrow?" my partner pleaded with the maid one fine morning. After ruining our sleep for seven consequitive days we came up with the solution.
"No can't do," the maid said, "I have only 7:30 slot free for your house. I have to work elsewhere and it is already booked."
"Can you switch us to another slot? Say after 10:30?"
"No," the maid replied firmly, "And I will take a holiday every Monday, weather you like it or no."
She announced firmly and went ahead to do her regular job. An hour later when I tried to show the same firmness to my boss, he repraminded me for coming late to office and insisted I come on time. So much for chain of command.

How we met our maid is also an interesting story in itself. It was 7 hours since we moved into our new house, 6 out of those seven were spend sleeping as we moved in late last night. Early morning 7:30 the doorbell rang and on the door was the maid. "I used to work in this house earlier, do you need a maid?" We needed one definately but had never decided on it. I think it was mostly the sleep depravation that we agreed on one.

What are your woes?