Have you been roasted recently?

I weight in three digits. Probably not as fat as Tanmay Bhatt but still not as slim as Arjun Kapoor. I fall somewhere in between. When you are fat, you are eternally roasted with different people, most common includes the pregnancy joke (how many months pregnant are you, spoken by 3227 people since I started counting). There are people who take offend to that, there are some who do not. If you are someone who takes offend to that, I will suggest never travel to the top-four states in North. Perhaps if you are living in there, you do not know to respond to someone using expletives against you. While this issue was being dragged, one old man tried to sneakily touch a girl in a flight, but how dare the girl? She went against our culture and disrespected the elder.

When AIB started as a radio show, it was funny. Yes it was but I couldn't open it in office, it started with a NSFW tag with their B. The show was filled with crass against different things that was passed as comedy. Was I offended? No, because they never asked me to watch it. It was an on-demand internet radio show that I chose to watch. Did I like it? No I did not like it as much.

But all hell broke loose when they decided to take the comedy forward taking a few consenting adults to throw expletives on each other and it went viral. A lot of people decided to catchup with them after their daily re-run of Tarak Mehta ka Oolta Chasma, which promotes eyeing your neighbours wife as a harmless activity and is a family entertainer, centered around children but that's accepted in our 'culture'. These people were offended obviously because of the words used but did nothing.

What happened next was a few more 'culturally' apt people decided to catch up with their daily 'let-me-see-what-offends-me' on the internet thing after watching an episode of Comedy Nights with Kapil. This show promotes jokes on a drunk old woman's loniless and an unmarried middle aged woman's desperation. Not to mention the insecurity of a family bread-winner, who gets all alpha-male around him dressed as woman, but that is part of our 'culture' as well.

They decided to complain about this to their wife, who were contemplating what they saw tonight in the episode of their favourite daily soap. That episode usually includes a external woman trying to snatch the male in the relationships and couples who get separate in an on-off marriage (not divorce mind you, thats against Indian culture).


Which means I spoke too much english, now I will talk dirty. Or the more 'cultural' song by Yo Yo Honey Singh,


Which means you come close to me, I don't get 'chance' everyday. I want you my baby, give me love dose (whatever that means).

The fact that 93 women are being raped in India everyday or that 53% of children are abused in their childhood, these songs do confirm the 'cultural' lineage of the country.

They were offended and decided to take action about it. How dare someone do something wrong about the proud culture they were trying to preserve. The insecurity of a great culture is so profound that sometimes even a single tweet can bring it down to its knees. So they took to every place they could find, including the courts. They took to Twitter that this is wrong. This was national shame. How dare consenting adults throw expletives against each other in full public view? They were not standing on Nizamuddin railway station, it was South-Bombay.

They complaint, they protest, some people decided to file a FIR in a country of comedy. The AIB team in all their glory and the freedom of expression, decided to do what every Indian Housewife, mother is doing for the last thousand years. Removed the video from YouTube and posted an open letter for everyone. It is understandable to be scared, no one likes to go to jail. You don't get to come out often from jail except if you are Sanjay Dutt.

But lets face it, if you are offended by something the logical solution is to protest against it. Not decide that since you don't like it, it should be shut down or pushed under the rug. The amount of attention this silly issue has generated, if only ten percent of it was focussed on rape cases, we would have made a lot of progress. Don't you think?

Sorry for the long post, here is a grumpy potato. 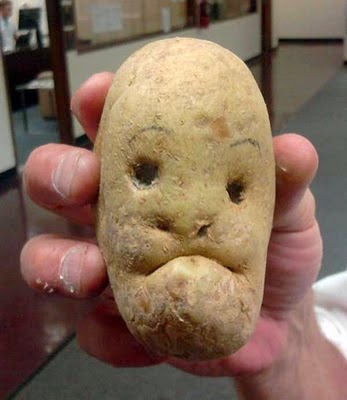