- June 25, 2015
The past year was something of a golden period for writing for me. For those who came in late (or not following me on Facebook page), I had a big writing year.  I finished the most epic science fiction book this year titled Ragnarok. The book will be released this August or September. A graphic novel titled Agatya is set to release immediately after that. Agatya is a book about the last line of defence between Heaven and Hell. That's two fictional releases back to back. There is one more technical book coming out soon (no release planned). And finally a short film based on a Short Story from this blog. (Read Original Ginger Chai if you are in that sort of thing)
I am writing a lot in the past year and that was a shameless marketing plug for my Facebook page. With all these books and releases I had a big writing year behind me since last May. I was writing and editing most of the time. And as with any normal human experience, you learn things. Here are some of things I learned during the writing year. We all know writers are self-righteous folks who will not go down without a fight. So here is a disclaimer, there are my observation and mine only. 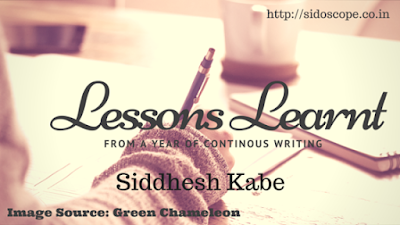 1. Writing is all about discipline

Writing is a profession filled with people who procrastinate a lot. There will be times when you will have no idea in your head. There will be times when all you want to do is give up, all those times you just don't. I had endless hours of staring at laptop screen. I spend hours stalking other writing friends on Facebook. But procrastination does not put food on plate. So had to push myself to do more. Write one more sentence at a time.

2. There has to be a trust between writer and publisher

The publishing process is a complex one. My lawyer always used to tell me, never run alone on a treadmill (during the startup days). You need a team to bring a product out in the market. While a writer does a creative investment on a book, a publisher backs it up with money. There could be a editor who is helping you out trim the book, there could be a marketing expert. All these people are putting their efforts in the book, trust them. Once you finish writing it is no longer your book, it is a product.
When I talked to Half Baked Beans for Ragnarok, their efforts were sincere. The editor gave a lot of suggestions, I may not agree with them but you have to understand them. For Agatya we had the artist as a stakeholder too along with Fablery. Writing a graphic novel is a collaborative process. There were discussions, there were arguments but what matters is that there was trust. As long as you trust the other person is doing what he things is best for the book, you are good.
3. There will be distractions
We live in the world where the attention span of humans is shorter than their thumb. There are weapons of mass distraction at the click of a button. Netflix releases Sense8 just when you want to finish the chapter. There will be a facebook notification or a phone call, right when you are thinking. The distractions are many and you will lose track of what you were doing. But you need to focus, bring yourself back and write. The chapter won't be as amazing as before but you will get there.

4. Self doubt is your best friend

As a writer you will feel sad about the work you do after some time. You will question it, you will burn it and you will hate it. What you feel about your own works will make the critiques sound like muppets. When I started Agatya, the story changed so much that Nethra had to give out an ultimatum.

5. There always will be a better way to do something, but draw the line somewhere

6.  You have to be unbiased about the characters.

When writing Agatya, I came across a character who acts as a villain in the story. The acts that he does and the pleasure he drives from them were unsettling. But writing a character with prejudice does not justify his grandeur. No one in the world things he or she is evil. Everyone does things for good. So when writing characters you have to think like them objectively. Also it is not a good idea to fall in love with your own character, that shows you need therapy.

7. Deadlines are there so they can stay dead

While I was learning this lesson, the editorial team was learning patience. I kept missing deadlines after deadlines. It was not on purpose, just my chant of adding extra hours in twenty hour did not work as expected.

8. Get ready for some harsh criticism

9. Nothing beats paper, not even rock

In the course of the year, I used multitude of tools. From Celtx for script writing to final draft for novel. I used Google docs for collaborative editing and Microsoft word for formatting. But when you are stuck you pull out a pen and a paper and start writing.

The most important lesson I learned, and this one is a bit philosophical so bear with me. After you finish everything, you keep writing. You move on to your new project and you and your ideas out there. While I prepare for the marketing for these books, I have started ideating on the next! More on that later.

Those were the lessons learnt in past year of writing. Obviously before you leave, hop on to the Facebook page for exclusive give-aways, merchandise and news about the book.