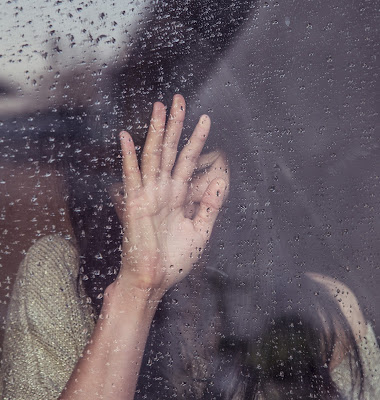 Plop. Plop. Plop. She sat there looking at the drops of rain on the glass window. The gloom of the situation dawned on her. She was stuck here beyond the man-made walls as nature wreaked havoc in the city.

"No this isn't it," she thought while glancing at the drops of rain on the glass window, "This is not how I am going to give up. How can I? after so many days?"
"This relationship is as old as me itself..." she thought again, "Yes, that's it, I cannot let it end."
She walked to the dressing room to quickly changed, "No need to overdue it. This is no celebration, this is war. Yes, it is."

She took the first step out of the door and it felt liberating. It felt like freedom, she now knew how the freedom fighters felt when they were fighting for freedom.
The sky broke apart, thundering on her as a warning to step back indoors. She refused. She was determined today. She refused to be told what to do today, even by God.
She double checked her purse. This was the only thing she needed.
"Yes, rain-God," her mind agitated, "This is a war against you too... you took his side. I cannot let it."
Every step into the dripping rain felt a surge of an energy boost in her. She was winning, "Yes, I can" she proclaimed and she splashed her way through the mud-drenched footpath.

Plop. Plop. Plop. Her shoes splashed into the mud with little sprinkles ruining her favorite jeggings. "These jeggings will be sacrificed at the altar of love, today," she announced to no-one.
As she tore through the rain drops and walked on the rain-soaked street she had one goal in her mind. Only one.  And she could see her destination around the corner.
There he was, grinning in toothless smile looking at her.

"Shameless," she thought, as she walked closer to him. With every step, the distance between them reduced and her anticipation increased. Her mind raced ahead, at the prospect of what lay ahead and she took a deep breath. This is it.

The moment was here.

He could not believe she was here, he did not expect her too. But he secretly wished for her to come. This was their daily ritual, an unspoken, unwritten ritual. He was standing here in the rain under the tiny umbrella waiting- his end of bargain met, was she about to keep her? They never promised anything to each other, they were not even exclusive. But something told her, she will come looking and when she did, he wanted to be there for her. And he was.

Her hands were numb, her hair, her clothes drenched in water. She shuddered as the chill spread through the veins. The numbness was spreading across her body, she could feel the energy dropping in her limbs. She had few minutes left to do it. The sky thundered once more, but this time, it only agitated her, energized her.

Directly looking at his eyes, she finally moved her numb lips and placed the change on his counter,

He obliged. How could he refuse the choco bar for his loyal customer?

Plop. Plop. Plop. She walked, carrying her choco-bars with her. And the distance between them increased. He watched her cross the street and hoped she would turn back once. As always, she did not turn back. He was not upset, she had left him behind as do the countless people who come to him. She was special for him, his loyal customer. And he was there for her. He closed the umbrella and let the cold rain wash on his face. Vehicles raced past him, ignoring the lone cyclist on the ice-cream tricycle climbing the steep hill alone. She was happy and in her happiness, he was too.
It was a long ride but he could not disappoint his favorite customer, could he?
She was back in her position near the window, she glanced at the world outside. It stood still, people were still as if waiting for the rain-gods to wash their sins. But she did not, she had won the war against rain-God. The two sticks in her hands proved it.

The nurse popped her head into the room, "Did you go out in the rain to bring your ice cream?" she asked, her voice raised in disbelief.

"Slurp," she replied, rejoicing her victory, enjoying the ice cream in the rain-soaked clothes.

The nurse rushed to fetch some towels to dry her but she didn't care, today, her ice-cream tasted better than ever.

Image: http://pexels.com
CC0 License
Image used for representation purpose only and is not related to the post in anyway.