When your wife asks you if she is fat, is that a question or dharmasankat?

Consider this problem- you are walking in the mall, grudgingly ambling with your wife, still wondering at what point her purse climbed up on your shoulder, when she suddenly pops up the question, "Did you see her?"

Now, you have seen 'her'. Every person in that mall has seen 'her'. She has painted her face for endless hours so that everyone will turn around and see her. Every man has seen wondering how lucky would someone be to be with her, every woman has seen her, wondering what does every man see her.

And yet, the married man, in the infinite wisdom of surviving the marriage finds himself in the limbo of answering the question. 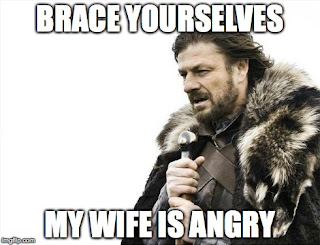 There are two possible answers to this question, quickly, the brain that is responsible for quick responses informs you.

Scenario number 1:
"Yes, I saw her," the man will reply, beaming and glad that he chose the right one.
"Why? Are you bored of this marriage?" is the quick response from the better half.
"No, I mean..." you falter, attempting to save the grace but you know there is no comeback from this.

And then we come to
Scenario Number 2:
There is only one type of people who do not see a passerby girl- they are convenient liars. Therefore, you keep in the tradition of the first man who walked on earth and lie, "No, who? I did not see her."
And the mind applauds in this scenario. Every cell in your body screams with joy as if they have survived the apocalypse.The blood cell gush downwards hoping to inform of the joys to come. But the whole thing comes crashing down when your other half retorts,
"You are so dumb, don't know where your attention is. Half of the time you are buried deep in your phone. Don't know who is there in front of you!"

And your entire life comes crashing down. There is a third option of staying silent but there are very few men alive, who survived the silence that accompanies after your wife asks a question.

But then, the part in the mall is drowned by the prospect of buying new dress and you can still get away with it but when the same trouble creeps up on you in an unsuspecting way, you cannot escape.

"So what would you do if a pretty girl talks to you in a party?" she asked me all of the sudden.
I glanced at her, hoping that somehow the tricks of Paul Ekhman might come in handy in reading her face to see exactly what she has in her mind. I found none. It's hard to read faces under pressure you know.

"Why you asking," I took the high road, countering the interrogation.
"Just, I was watching this show, Emotional Atyachar, yesterday and it occurred to me that you would not pass the faithful test..." she said matter of fact sipping through her cranberry juice.
"Well... obviously I won't," I smiled, "I would know its a trick."
"Interesting..." she smiled, I knew what it was, deception. She was onto something and then on her face it was pride and happiness. Holy Cow, she has the number to the show.
Super butt clenching moment.

"I do watch the shows darling," she smiled and left to get a refill.

Here I was having goosebumps fearing every female walking near me... lest I land up getting slapped on camera.

Then of course I come to the biggest question that has haunted mankind since ages, it was even asked by Mrs. God to Mr. God and might be the reason for his absence, but that's for another day, the most dreaded and dangerous questions, 'Do I look fat in this dress?' Dharamsankat to the core.

After a preliminary research on the subject, we have come to know that there is a clear buffer of 72 nano seconds in which your brain should process the words and come up with a good answer for it, which should always be 'Of-course not, you look pretty in every dress." Many men have fallen into the pause gap, causing them great distress and horrible pain in unmentionable places. Mind you.
We were in stages of ground breaking discovery into increasing the time limit of 72 nanoseconds to something much more, but we could not get funds for it.

Most universities, which were headed or looked after by woman, clearly did not entertain our proposal and others were busy pondering over what came first, the hen or the chicken so this research was cut off. We still are looking for sponsors for the research, if anyone wants to find the answer.

So you see, life does poses some problems for you which are more critical than derivative equations, which does not also justify the torture of derivative equations in a adult life, but these problems are there and it will take more processing power than a zillion super computers working together to find the root cause of the problem.

Till that time, lets face it, we are not going anywhere.


P.s. "Dharamsankat" is a Sanskrit/Hindu term, which means great trouble.