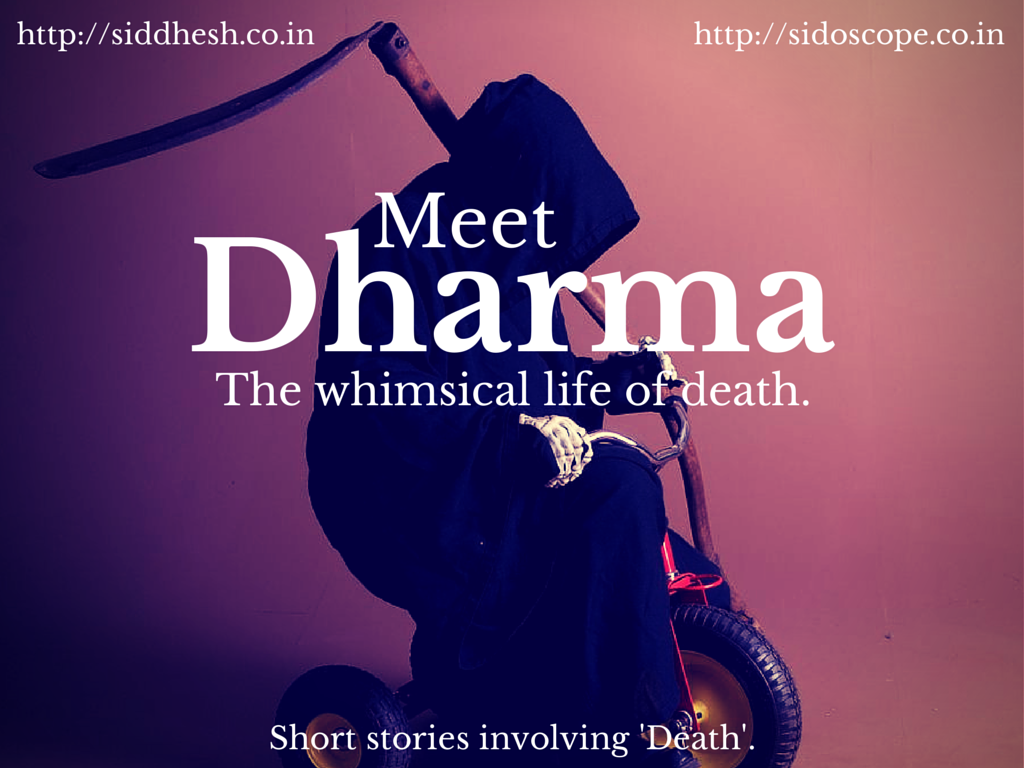 She walked the dark corridors in the grace of the wind. Softly,steadily and stealthily she crossed those marbled floors. Being the youngest of the sisters, Death was very good at her job. She made sure she completed her job just as wanted by her Eldest sister Destiny.

Her long earrings and the beaded necklace jiggled as she swivelled around the corridors, giggling to her self. Her brother Life always called her maniac and whimsical, but she deterred. She was good at what she did and what she did was not so good. They all pictured her as a fearly rabid animal or a skull with a wicked grin, some also pictured her as a fat black man with horns as his helmet, if only they knew what she actually was…. she giggled.

But she never understood the mortals fear against her, why did they despised her so much? The only thing Life offered to them was existence and in return her brother siphoned them of their existence day after day until nothing remained, no will to live. Their bodies degraded as the years passed and the weight of time fell on them. She did no such deal, she simply took them away to a better place…. only if they knew what was after death. But her sister Destiny had forbidden to tell them what happens after Death or Destiny will never be free.

She jiggled her way through the walls and heard the voice at her destination.
'Push, Push, Push…’ the doctors screamed, helping the lady in her labour as the baby made his way into the cruel world. He will be crushed under the gravity and bound to Destiny. Long back Destiny had chained the Rules of the Universe to herself, the sum of lives of all the wretched mortals. But their cunning brother had twisted it on them itself, now the Destiny was chained to the rules. Were to rules chained to her or she chained to the rules, no one could tell, not even she herself. But she said it was her Destiny to be chained to the rule book, so there was no escaping it.
Still if Death will tell people what was in store for them after death, her job would be so easy, but then everyone would want death and that cannot be good.
'Push…. c’mon Push….’ the doctors urged, hoping not to use the ventouse for delivery.
She softly stood next to the mother and the baby, deciding which one should she free of the existence. Her mind manically danced on the halfway body of the baby, a cold shudder passed around as the mother felt the energy drained out.

‘Get the ventouse….quick,’ screamed the doctor attempting to save the baby.
She giggled at the fruitless efforts of mortals, trying to prevent the unevitable, let it go already, she though to herself. Its not that you have succedded so far,have you? Her hands danced on the chest of the mother,who found a new form of energy passed on her body and started pushing the baby.
After an effort the baby was out in the hands of the doctor who was being praised by his fellow mortals.
She liked this part of her job very much, new born babies were her speciality, she knew they would suffer the most once she was done with them. Slowly she walked to the baby, now in the hands of the doctor. She was not greedy at all, not like her Brother Life, who at times send more than one mortals and both were bound to each other. She treated her every mortal with respect and separation.
Her cold hands touched the forehead of the new born baby, the baby could not feel anything…. not yet. Slowly she bend over the baby and whispered the words in its ears, ‘I’ll come back for you when your job is done,’ she said.

The baby started crying loudly in a ear deafning noise. The doctors clapped hard and praised the Lord for the miracle. She walked gracefully from the hospital as gracefully as she came. She has just breathed soul into a fresh corpse, now was time to sipon one out of a tired corpse, so the balance in the universe would maintain.
They always praised the Lord for the miracle of life, not knowing that they are at the mercy of Death even to survive. Deaths job was not to take away souls from the corpses, that was already done by Life and Destiny, her job was to guide them back to fresh corpses giving them second chance to survive the Life. Her brother hated that, so did her sister. But she was as whimsical as any.
It was just another day in the life of Death.