The False review of the New Samsung Omnia W

- January 21, 2012
When was the last time Microsoft made people happy? Well, I don't remember exactly and being a serial Microsoft hater I don't want to remember. Honestly, I don't think the company is bad, I just think they design bad software but that is ok, we all have done that, but worst part is they don't accept it.

Technological innovation has nothing to do with business and the fact that they do business on technology is bad. When Samsung Omnia reached my doorstep, I took it as a sign from the universe that something is changing. Now lets face it, Apple is Apple they are good at something, they don't do it for free. Google in turn are slow and steady, they believe in giving it all for free, who can blame them actually?

So I got Samsung Omnia W in my hand, I kept an open mind. I was not going to judge the windows mobile based on its big brother, windows. Ofcourse every family has a bad apple? Isn't it? (Apple here refers to the fruit which is grown using chemicals in a farm, not the electronic device company which manufacturers phones) 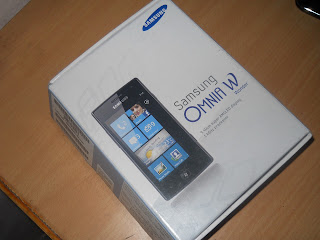 A disclaimer, just to be clear, if you are looking for a suitable life partner for your other electronic equipment you can look-up the technical specifications of the phone go to some other site like gsmarena.

The first impression of Omnia is wow, yes Wow, the UI is much better than Android UI (which is what I do not know, considering there are many launchers out there.) Yes, the phone has a much better UI specially if you compare it with other normal phones and some smart phones.

Microsoft has determined to be the iPhone killer to the extend that the phone refuses to scroll vertically. Every scrolling is done horizontally. The UI is the same as Zune (the alleged iPod killer, don't laugh!!!). The phone is simple to operate on with clearly marked big icons indicating Phone, Messaging and other things.

One bad thing about the phone is no expandable memory, so if you already are using a smart phone, transferring that data is a big pain in the... backside. Talking about transferring, the phone does not detect any Android device while connecting via Bluetooth, no idea why. Connecting to PC is also a pain, because it demands you install Zune counterpart on your PC before it is connected (Maybe this is a iPhone thingy, but then I did not like iTunes either).

The UI is very appreciable in terms of impressing you for the first time, however, after using it for a few days you get weary of it. The shine drops down and you carry in your hand a phone that refuses to connect to any PC without its Zune software, cannot expand memory card and also cannot connect to other smart phones via Bluetooth. But as my girlfriend points out, I am biased about the phone because I am having an affair with Android phones (3 so far), maybe yes, so that's why this is actually a false review of Samsung Omnia W.

All in all, Samsung Omnia W is a good smart phone for those who want to use a smart phone or blackberry but are not smart enough to configure it according to their needs. It is a welcome change from the traditional Java and Symbian mobile operating system, but has a long way to go if it is comparable with Android or iOs.

Samsung is busy keeping its commitment to install every mobile operating system they can get their hands-on on their devices and Omnia W marks the threshold of a generation of Omnia series which would run Windows on Samsung phones.

Its a Saturday and you have nothing to do, hope you enjoyed this false review about Samsung Omnia.

P.s. Pictures clicked by the greatest photographer of the century, me.

The Review Scale of Sidoscope: