Why Prince of Nigeria could never start a riot

Sounds familiar? The nigerian prince scam is the most obvious internet scams in the history of internet scams. The email is so obvious (assuming you are not gullible) that we simply smirk on it and move on. Yep move on, this email was very popular in the olden yahoo days. 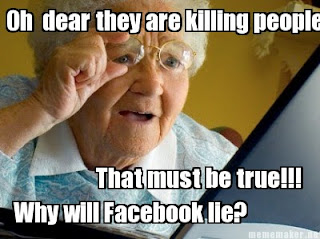 In the past few days some more scams are coming to light, like the fake killing of people email/ social network post from Burma. There was also a popular social networking share about some mother who held her child tightly during an earthquake and the human bridge Indian army build to help people cross and yada yada yada. What is common in these post and the nigerian prince email is that they all are fake and yet, millions find them in their inbox or wall everyday.

Why is nigerian scam so obvious when you read the email but when you see the killing of people in Burma does not look fake? For most part, many people actually wanted to believe it to be true. When there was a rumor about attacks on north indians in Bangalore people fled to the railway stations, because some part in them believe it to be true.

That is the crux of this issue, rising insecurities. People are getting more and more insecure with their community, it can stem from heavy unemployment, illiteracy and even systematic brainwashing. Humans tend to believe in what we want to believe. So are we all suffering from mean world syndrome?

"Mean world syndrome" is a term coined by George Gerbner to describe a phenomenon whereby violence or negativity-related content of mass media makes viewers believe that the world is more dangerous and negative than it actually is.

George Gerbner argues about effect of television on human mind and prolong watching it can result in the idea of a negative world. The same can be applied in todays social network where rumors can escalate exponentially. Fear Uncertainty and doubt (FUD) can make people do a lot of things. Companies use this to hammer discipline in employees, 'if you don't work properly, you will be fired', 'If you don't quit smoking, you will die.'

A person who is suffering from mean world syndrome when sees the social media post about his community being targeting, automatically believes it to be true. If the person who shared this post is a trustworthy person or someone we know the appeal increases even more. It is easy to snowball hatred on social media, this is how terrorist are recruited to be killed in an attack. The terror bosses are safe in their posh bungalows watching people die on a big screen television.

How can this be prevented? First of all learn to identify the truth and trust your instincts. Do not believe everything on television and internet. Second, be responsible on whatever you share on social media. We all have become broadcasters now, we need not follow the main stream media method and become biased on what we share. Take responsibility of what you share, check for authenticity before you pass on the message further (it could be as simple as google search).

Remember, sharing information requires one click of a button that single click could result in someones death. He may or may not be from your community but he is definitely not worth dying due to false information.

After all, prince of nigeria did not share his fathers wealth did he?