August 18, 2014
A while back I moved to London. The transition was smooth, I packed a box of seven clean underwears, a packet of bakarwadi (it's a pune thing), few clothes and was on my way to the land of Queen (real one).

It was a new experience altogether. First thing that stuck me was how many people had wrong advise about traveling to London from India. As goes the unspoken law of char log kya kahenge, my journey to London spread across the community of people I knew (and didn't know) and they had to meet me to talk to me. How do these people even communicate? Do they have some whatsapp group that we don't know about? Or do they like have weekly conference call to get status update from each other. "Oh my son just got a job with Xx salary, what about you, report." Anyways these people kept popping everywhere with advise in abundance.

"Oh be careful about immigration officers at Heathrow airport. They provoke you," said one wise fellow, "They have a right to detain anyone who creates ruckus and deport them from the country."
"Remember, " said another, "I have heard that British Airways is a bit of racist towards Indians. Be prepared to face that."
"But you have never left your house in forever, how do you know that?" I asked.
"I read," he said, "I have a news filter that tells me all countries that are racist towards us. I think they are jealous of our rich culture and the fact that our national anthem is chosen one of the best national anthem in the world."
That jibe about national anthem went for another fifteen minutes. Before he could start about his long lost anscestor, the Prince of Nigeria, I made an excuse of going for a TB test.

The number of people Indians know from London is alarming, "My closest friend lives in London. If you have any trouble, just pop over to him," he said.
"Thanks, I'll need them when I am actually house hunting. Can you give me their contact details so that I can call them when I reach in London?"
"Sure give me your email id," he continued, "I don't have their latest contact number but I have their yahoo email Id"
I'll tell you what, I am a email racist ok, you give me your yahoo email id and I will judge you. You give me your rediffmail email id and I will start looking for your tail. 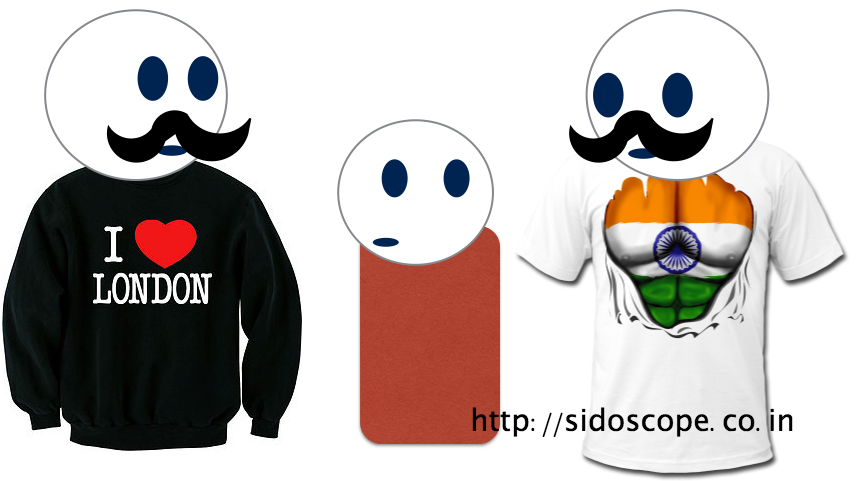 While this one going on another set of people started popping up at different times. Now these set of people were not here to advise me on what I should do in London (thankfully) but rather what my personal choices are and how me moving to london is going to throught India back into stone age.

"Why you don't love India?" he asked.
"I do..." I shrugged.
"You don't get enough here or what? Leaving your country, you learn in this country and become corporate slave for them..." and the lecture went on. The problem with that was, during is swadeshi moment I was struggling hard to find a pause to gulp my coffee.

Two weeks later I am on a 9 hour day flight (I counted) chasing the hot sun, five pegs of whisky, two hours of sleep and watching two movies back to back later, I realised, I am in London. No there was no racism on the flight but i may have troubled one flight attendant talking about my allergy to certain vegetables while gobbling on vegetarian food. Poor fellow she kept checking on me from time to time.

No one provoked me at the Heathrow airport. The immigration officer in Mumbai had more questions for me but those were mostly because he could not believe anyone would want me in London (I get that a lot).

Stepping outside the Heathrow airport and breathing the British air for the first time, I realized... dammit I forgot to pack six pair of socks.

Have you had any such experience while planning a trip? Share them in comments below