An auto-rickshaw in need is very costly indeed. 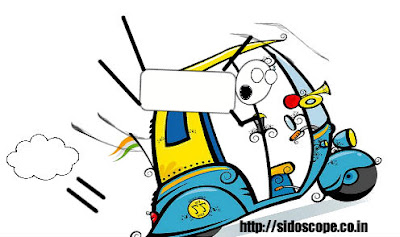 India is a land of spiritual getaways, people from all over the world come to India to getaway from their life, wife, boss and sometimes they just visit to create albums on Facebook. The tourist love to see the Taj Mahal, they want to visit the Himalayas. There are multiple brochures printed in colorful ink of thousand spiritual getaways in India. The tourism and spiritual brochures miss out on one big spiritual one can partake in this crazy country is riding in an auto rickshaw.

One small journey in an auto rickshaw will give you the spiritual enlightenment that sages get ages to attain. The biggest philosophical discovery of modern India is how does the auto rickshaw meter changes its value for same distance depending on the country of origin of the passenger or the state of origin of the rickshaw driver. Just like the Knight Bus (from the Harry Potter) these rickshaw will come to your assistance whenever a witch or a wizard or anyone with money needs them.

There is a well known curse in modern India that the auto rickshaw driver will be fluent in the language you have no clue about. Like in Bangalore if you don't know Kannada, the chances of first rickshaw driver knowing Kannada are greater, the second and third one will definitely know Kannada along with Telugu or Tamil. The forth guy will put a good effort in speaking English with you but then halfway along will give it up.
The fifth guy won't stop. You won't wait for the sixth rickshaw.

Don't act surprised if a Gujarati rickshaw driver comes to your aid in Mumbai. The Marathi one would be in Ahmedabad. Its globalization, nothing else.

One of the biggest spiritual journey happened to me on a stretch of road that was, by the look of it, built to get dug up every fifteen days. I believe they roll a dice between different departments to get dibs on who gets to dig first. The road was build, dug up, patched up roughly, dug up again, patched up roughly again, dug again and so on. Till what looked like a track for dirt biking. The rickshaw driver with all his infinite wisdom and dexterity of an Ninja ignited his engine and drove on.

I hung on tight to the ceiling as life speed past me, also did the potholes, a vegetable vendor and... huh... an elephant. That rickshaw ride brought me in full circle with life. There is a theory that says that the moment you understand the rickshaw meter, they replace it with something completely random.

The auto rickshaw is always with you, for you wherever you are, until you desperately need one. A rickshaw in need is very costly indeed.

No one really knows how one came up with the concept of rickshaw. Was that a bad idea to make a big scooter or someone missed out to put one tyre into a four-wheeler, we will never know. What makes a rickshaw meter tick, we may never find out.

But whenever you visit India make sure you experience this spiritual experience at-least one time. Ride an auto-rickshaw on the streets on India and suddenly you will feel the sense of fulfillment encompassing your entire life.