Comedy Nights are not so comedy after all!!! 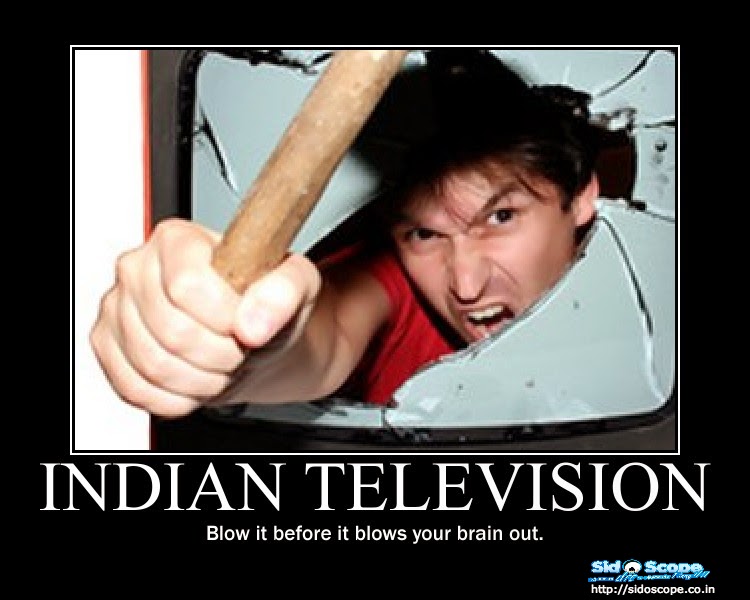 On a Sunday morning as I left the humble hug of my cosy 'rajai' (a cruel form of blanket that hypnotizes you to procrastinate) to engage in the oldest profession of humans, hunt for something to eat, every door along the way was tuned into some famous show.  By the time I reached my parking, I had listened to the complete title song in bits and pieces. To their credit, one house was watching Chota Bheem but thats not the topic of this post.
Over the period of time the condition of Indian Television has deteriorated much worse than the concept of auto meter on streets of Delhi.  I had this crazy idea a couple of months back that I am going to turn into a perfect Indian. I replaced my toothpaste with Vicco Vajradanti, got a Chandrika soap and even used Chik Shampoo. During this phase I decided to abandon American television on and switch to Indian tele-serials only. Yes, that means no... wait for it... Star world HD, no HBO (gasp) and definitely no Star Movies HD (Suicidal!!!)
A week later my D2H provider was glad that I spend a lot more money in subscribing to premium channels like Star World Premiere HD, HBO Hits and HBO Defined. It was needed or the other option was to get admitted in a mental asylum which was more costly (I checked).
Here is the thing I discovered, the entire legion of writers and creative heads come up with more and more creative ideas of how to connect any Godamm story in the world to some Saas Bahu show. Every story starts with something unique, something different. One serial started with doctors in the lead and while the set was of a substandard quality (the hospital looked like a waiting room for bus stop with beds), the story proceeded at the snails pace for a month and the lead got... wait for it... married.
Another show jumped timeline faster than the Government in Delhi could survive. In a month they jumped 7 years, in another four they jumped 20 years. Before we would figure out what happened when the small kid in the show got... wait for it... married. Here is the damm thing, every sort of the show has to have a SaaS and a Bahu. Along with them comes a third person who will drive a rift between the wife and a side actor for a husband. All stories sooner or later jump the ships to the same story line. Its as if, before dinner, every writer sits down to watch what his competing show is doing and pick up stuff and try to connect it to his show.
Such is the insignificance of these writers that nowadays networks and production houses do not even bother to hire them. They will throw in a bunch of out of work celebrities or gather people that can create controversies and write a show around it. The reality shows are draining out whatever brain is left from the indian audiences. Making crappy shows may not be a big deal, but the trend becomes disturbing when families sit together and watch a Holi Special or Diwali special episode of their favorite serial and forget the festival in their own house (Marketing plug: Wanna know how they make a reality show? Transcript of what we overheard at the Double Shots inn). Celebrities endorse flat screen televisions with some advance technologies that would put alien spaceships to shame. But I don't see the point is buying a very powerful television unless you are doing a research on the clarity and lividity of the tears rolling down the cheeks.

Because I don't dare to touch the concept of 24x7 news channels, I dare to make serious comments on comedy. Or I don't. But the term comedy is misused so ballantly on the television show that even it has lost its meaning. Any show that has comedy in its name has either a laughing guest who is paid to laugh or some cross dressing actors that will make some slapstick comments and physical comedy that is not helping anyone other that the guest (who is paid to laugh remember). This person can laugh even on those poor jokes that are forwarded on whatsapp that no one likes but are forwarded anyways.

Indian television boasted at some of the classic hits, how can anyone forget Nukkad, Yeh Jo Hai Jindagi, Chandrakanta, Shanti, Hum Panch and many more that entertained us for years. These shows had situations, had grandeur, they had entertainment quality and were not merely written in hurry for making quick bucks.

Indian television is dead, sadly the oldest family member in the biggest joint family potrayed on the daily soap is still alive after 200 episodes and a million years. Till she dies, foreign televisions shows it is.