[Short Story] Faster than the Speed of Death 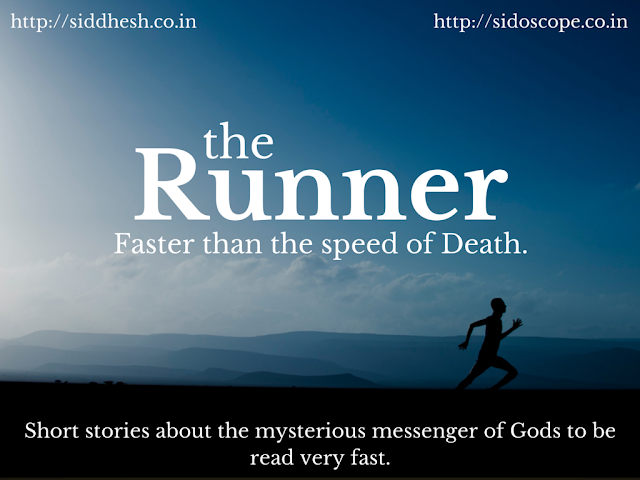 "I thought I was in hell already, what can be worst than this? - Is this the right question to ask while being chased by a bunch of angry tribal warriors?" he asked himself as he pushed through the dense trees, "Stress on 'angry' and super stress on 'tribal'. Their spears are laced with poison that can kill a fat rhino in a shot," he reminded himself, "The fat rhino for lunch was tasty by the way."

He was called 'The runner' by anyone unfortunate to know him. Not because the Runner was running from almost every police department in the world. Also not because he had spent most of his life running from the situation. He was a messenger and was very expensive and very exclusive. His clientele included people who had 'few' disagreement with the general law. He delivered goods, messages and items to any location possible with one quality that the regular courier service never offered, no paperwork.

It was also one of the qualities that made most of the police services come looking for him.

Today's job was different, there was no money involved. No, really, no money involved. How much money do you ask Death from? You heard it right, Death. Picture whatever you like, full-on a cloaked man with a grim or a teenage goth girl or even a flying spaghetti monster.

He met Death, it was on a Thursday lunch hour.

Lunch hour on Thursday was a crazy business. It was mad because it was not a Monday or a Tuesday or a Friday, it was that awkward Thursday.

He was eating kheema pav at the local Irani cafe.

The chicken kheema was having a disagreement with his digestive system. He looked around and burped quietly under his breath.

"You are excused," a small boy was watching him intently from across the table.

"A fourth standard kid who should be in school at this moment," he replied.

"Interesting, that is something you should work with your psychiatrist. But again as I said, I have work for you."

"Who are you?" asked the Runner, looking around, did the cops started using school going kids for sting operation.

"Right." the boy said, "That," at that exact moment the scene changed, he was no longer at the cafe and the boy was a dark, grim figure dressed in a long overall black cloak. The face was covered in dark overalls, and the boy's voice had turned hoarse.

"Is this biblical enough for you?" he asked, "Do I need to tell you who I am now?"

The look of horror on The runners face indicated that he did not need to know.

"Work?" The Runner realized that he had to finally stop running. Death had caught up with him, "What kind of work can you have for me?"

"Bournvita," said the boy to the waiter who had come to wipe the table.

The waiter eyed both of them and left.

"Work," the boy said, "Yes. Work. Nothing that is difficult for you. Need a person of your skillset."

"Yes, yes I know, I know," the boy said, "Sure I am the most powerful of all that is, and sure it's my job, but you know performance is a problem in this modern world."

It was exceedingly difficult to be afraid of a ten-year-old boy.

Running, that was what Death said. Running, smooth as a slicing a knife through butter. Run, Run, Run. What Death had failed to tell him was running was not going to be easy as the tribe chasing him was the most ancient hunting tribe called 'Sons of Ka'.


The tribe was the direct line descendant of an ancient witch-doctor 'Ka'. The witch doctor was known to be an expert on black arts and also rumoured to be the first black magic performer in the world.

Using his power of black magic, he managed to defeat Death in the game of rock, paper and scissors.

Defeated in the game, Death asked him for what he sought.

Ka was the most knowledgeable and wisest of a black magician in the world, he smiled and said, "I seek the heart of death."

The heart of Death, Runner thought, that was the thing that was pounding near the chest. All he had to do was sneak in the village and snatch the heart and then run. Legend says Death hates his heart so much that he does not seek it. The sons of Ka lived for more than a thousand years from the aura of that heart.

The account was overdue, Death was impatient. He wanted someone to pick up the heart and run, leaving the village exposed to him.


Runner dashed as fast as he could. Just over the cliff, he said to himself. It will be all over soon. One of the sprinters from the tribe was very closed to him. This made the Runner very nervous. What if they catch him? What if they inject him with one of those poison arrows?

His thoughts were cut by a loud wail by the sprinter behind him.


A thorn had pricked the sprinter's leg and was now bleeding. Runner smiled at his luck and dashed on. He wondered if Death was protecting him from whatever misery was going to fall on him. He knew Death was...his leg slipped, and he fell.

He rolled over from the sides of the mountain and crashed full speed into the chasm below.

Seventy feet into the chasm, he crashed hard on the granite rock. He never stood a chance against Death, did he? Slowly he closed his eyes.

"Ahem," the boy disturbed him.

"What?" the Runner said, opening his eyes, "Happy now, I being dead and all?"

"I am not?" the Runner looked at the cliff above, "Are you telling I survived a fall of seventy feet on the granite rock?"

And then it dawned on him. Death cannot touch him till he has the heart, "Well, that was handy."

"Yes, it was, now put that heart inside this box."

"What will happen to them, The sons of ka?" he looked up.

"Thorn prick," the boy said, "The Runner behind you? A good runner, he was awarded four times last year for the fastest Runner in Kalympics. He will soon find out he has a thorn pricked in his legs while he was chasing you."

The Runner looked at the box in the boy's hand, "And you won't chase me once I place this heart in the box?"

"Soon?" the Runner screamed, "What do you mean by soon? I hope you mean soon like sixty, seventy years later? Is that soon enough for you? Hello?"

He was standing in a chasm alone.