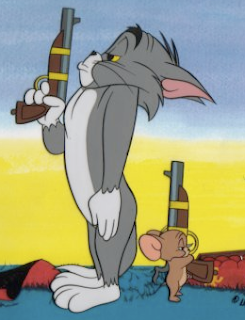 Its a curse on humanity entirely that one letter can make a hero into a villain. Also, the notion of hero and villain entirely depends on which side of law are you standing. I think finally it was the O that made the entire different, O was chasing O which O was hunting O. One was chosen by masses, other emerged from and collected masses. Both brilliant orators, one the leader of largest and the most violentic group, other a leader of the largest and deadliest group. Both planned, one against other, and both for the greater good.
One cannot live while the other survives, one cannot survive while the other dies. To choose the hero and villain, you just need a little perspective.

The bullets firing around the compound, helicopters circling. How I wish it was my neighborhood, sadly it wasn't. Not that there is any terrorist living there, this is India, terrorist eat chicken biryani in jail and not my neighborhood.
But no, I was talking about my neighbor. Mr. Sama, this man is one 'O' in becoming the worlds most wanted terrorist but no one listens to him, not even his wife so chances of him running a terrorist camp is zero. But he is evil, he never returns the ball entering in his compounds.

Our society chairman, Mr. Bama, was hunting for Mr. Sama for last ten months. They hunted for him every where, but Mr. Sama was nowhere to be found. Ten months ago, Mr. Sama had burst some firecrackers inside the house of two society members. The two members troubled with this had left the society forever.

It had become a personal issue now, for Mr. Bama, who hunted Mr. Sama everywhere. Mr. Sama was slippery, he hid himself carefully away from privy eyes and then send fort his sons to create more and more nuisance in the society.

Mr. Bama finally, zeroed down the location on Mr. Sama and after ten long months, the security guards of society found Mr. Sama hiding behind the bed, scared and putting his wife in front to escape the inevitable.
The security guard kicked him and his son out of the society.

Finally there was peace, wasn't it? You wish, become unlike chess, in real like, the game moves on even after check-mate. There were many supporters in society who simply stood where Mr. Sama stood and the whole drama repeated for another eternity.

And the thing about eternity is, it begs a simple question, when will it end? and worst... how will it end? Food for thought?

You differ? Of-course you do, thats the beauty of it.