Blog in the Times of Traffic


There is a inherent believe in the common public that during peak hours the horn of your vehicle magically transforms into a device that will make the traffic in front of your disappear. I find no other explanation of why people honk their horns waiting for traffic. Bangalore traffic is no different to this myth. When you live in Bangalore for more than year you don't know why you are paying so much rent when 3/4th of your day is spend in traffic jam.
On the lazy tuesday morning it took me exactly 2.58 hours to cover a distance of twelve kms giving a rise to a number of things. First, I took nice power nap in the middle of the road for almost fifteen minutes as the traffic would not move. Second, I did many phone calls to random people in my phone list giving rise to some shocking, surprising and some serious stories that cannot be shared publicly. Third, popped an idea in my mind about a blog post on traffic woes we see in India.
It thus happened, I was designated driver to pick up a presumptuous pompous Indian-Born-American-living-and-believing-himself-to-be-a-foreigner friend who returned to India after six months. As we drove around, exactly 96 secs of unable to control himself he started,
"Those americans are so particular about their traffic. They will never break a single traffic red light," he started which is a generally acceptable form of conversation starter.
"How was your stay there, you had good food," I said politely changing the topic because I knew where it was heading.
"Food was a big challenge, these americans eat holy cow, can you believe that?" I can, "I could not find decent food there. Thats why I asked my mother to make a nice dal-chawal today."
At this moment we had reached an intersection which was completely deserted. I decently stopped the vehicle for the red light.
"Arey nobody is here," he exclaimed to my surprise, "Run over the red light, I need to eat that dal-chawal hot." He went ahead to talk about his returned from america stories, I simply wished he had returned with something more than stories. I did not run the red light.
There are people who take pride in doing things others should feel ashamed off. Spoke one rickshaw driver offering me a premium fare for breaking traffic rules, "If I go with the traffic, it will be fifteen bucks but twenty bucks and Ill go via the one-way and help you reach faster."

They say parking is a common problem in Bangalore but the old madras road is a very common parking lot with lots of vehicles parked for hours. During this period you actually feel the world has stopped and want some peace and quiet. You are contemplating the choices made by you in entire life, that has transitioned your journey to this point. You plunge into a nostalgic moment remembering those who were left behind in the journey of life and at that moment... a very deadly horn barks at your ears by a very bored bus driver. Apparently, honking horn is a favorite past-time of bored drivers. 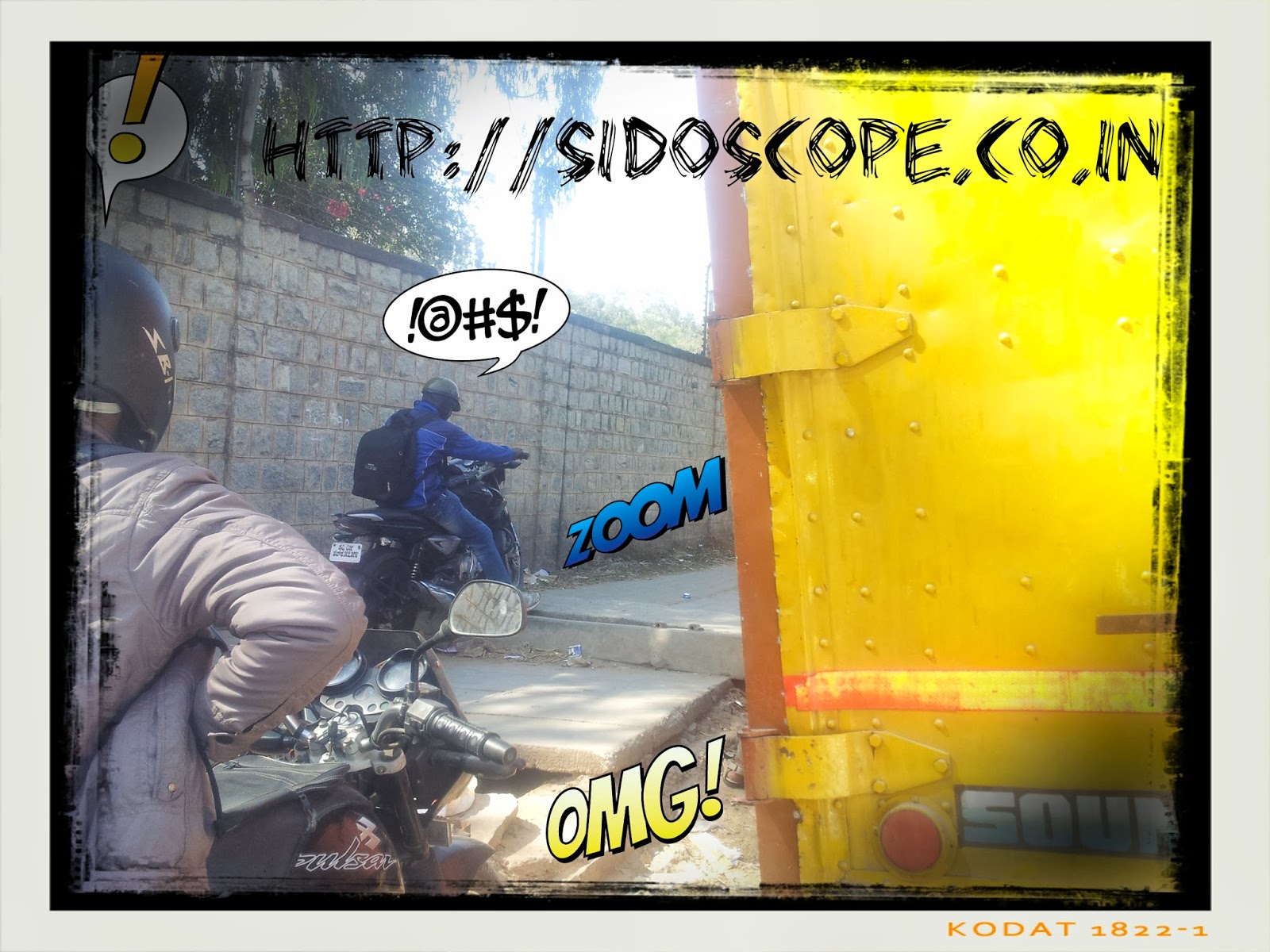 Taking about past-times, in India the training for dare-devil stunts is taught on the streets. While it is normally accepted that footpaths are meant for riding a motor-cycle or using it for hawkers, it was a slightly surprising to see bikes climb over a girder lying on the footpath (which is the proof of the country that 'manufactures' worlds largest engineering population but that is for other day). Not one but total seven riders attempted this daredevil stunt back to back and got stuck over that girder.

It offered a very nice entertainment for almost twenty minutes to see every biker attempt the jump and failing miserably. You get to learn new things sometimes you learn spanish while staying stuck in traffic, other times you get entertained by listening to Kannada songs on the radio (and no I do understand Kannada, its just fun to listen to them), sometimes you can read your book standing in while, while once a while you can publish an entire blog post waiting for the signal to turn red.

Because life is all about moving ahead. Life is moving. The traffic poorly not so much.