But Women Need to Be Empowered Too 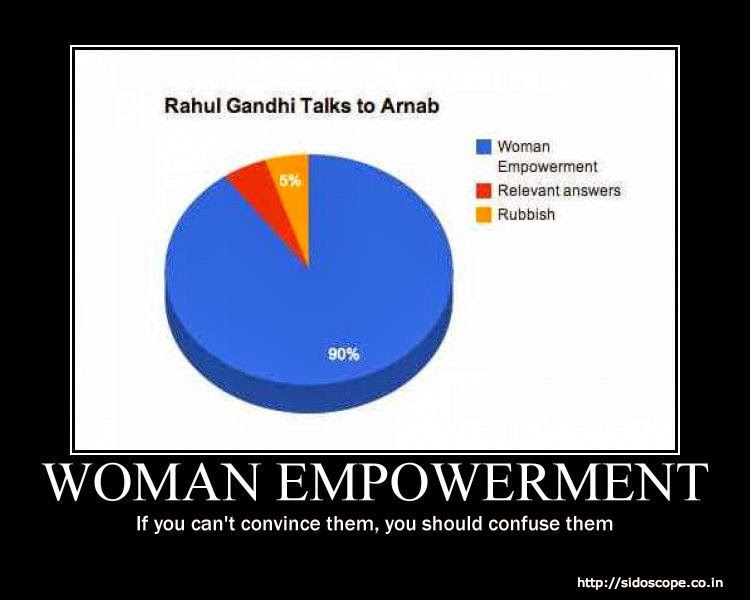 After Mr. Bharathi of the AAP fame decided to raid a so-called African drug party in kirkee, the residents cheered. After all these Africans were walking around wearing short dresses and "ruining" the "sanskar" on their boys.

A wise man once said With great powers comes great responsibility but these words are wasted on the crusaders against corruption as they go on stage with a list of people who are corrupt with no proof attached. Neither did they think it was wise to approach the police with proof of corruption against these politicians, because obviously, there is no aam aadmi police force yet, so the remaining cops are corrupt and in league with these politicians.

While corruption is a major disease corrupting the roots of this glorious nation, populist policies and bad governance are not very far behind. Heard of a doctor who insisted in curing the cancer but refused to give medicine for common cold?

One of the biggest common cold this country is suffering from is giving subsidiaries, freebies and food securities to people below poverty line. The politicians make very sentimental statement about how every man should have a morsel before going to sleep and all that. The only problem is, most of these politicians keep their money safely in swiss accounts and people like me work for almost half the day to just fulfill their ambitions.

India is suffering from the dynasty politics by one family for over six decades. Oddly the one man who is against dynasty is the next hier to this dynasty. Oddly enough I thought the interview of Rahul Gandhi was the high point of my week but surprisingly, there was someone who could beat that interview easily.

I am talking about Dr. Asha Mirge, a gynecologist from Akola and currently member of Maharashtra woman's commission and also a wonder woman in her part time explained the entire concept of self defense. "Girls should be careful about what they wear. They should mind the time of their moving out. Girls' body language should not be such that it invites attention of a potential rapist lurking around" was her super formula to save every girl. Obviously, the rapist are known to follow the timings and they definitely do not rape anyone wearing full clothes. There are no rapes happening in middle eastern countries, haven't they made burqa for that... which is working fine for last hundreds of years.

But we have to empower woman, Rahul Gandhi spoke about woman empowerment for 23 times during the interview with Arnab Goswami. Should we expect some full clothes security bill for girls named after some Gandhi family member that will provide gowns and burqa (because this post is secular you see) for woman in this country in the days to come?
humor Politically Incorrect