This post has been published by me as a part of the Blog-a-Ton 19; the nineteenth edition of the online marathon of Bloggers; where we decide and we write. To be part of the next edition, visit and start following Blog-a-Ton. 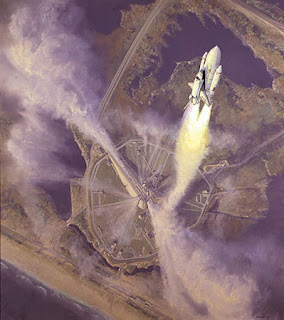 This is it, he thought for the last time. Standing outside the cockpit of the space shuttle, his journey was about to begin. He was to leave the planet for the last time, he glanced at the skyline covering their blue sun for the last time. The intruders where here and had declared them self. The entire planet of 400 billion was being exterminated out of existence.

The aliens had declared war for existence, obviously they wanted to live or so did we. The entire panel of elders had chosen him to investigate the origin of these species, the intelligence gathered would be used against them. He had to travel 3000 light miles in the space shuttle and come back with the report in two months. The first group of armions would hold the station for two months, when they would have the intelligence to defeat this monsters.

He glanced back at the twelve elders smiling at him, giving him good luck. Obviously they do not realize the flaw in the strategy, the entire hope of the planet of 400 billion rested on his shoulders, there was no backup plan. The backup plan was horrible than the original plan, the elders would trigger the ultimate sacrifice, they would destroy the planet and not submit to these aliens at all. He would not let this happen.

The space shuttle fired beyond the seventh layer of the atmosphere. Officially, he had breached the God convention that was passed 64 years ago, no person would cross the seventh layer of the atmosphere. But God was the problem in this, the aliens were God, powerful and dangerous. The ship entered the worm hole, the path the aliens invaded the planet.

'Entering the Phatterlean atmosphere,' the ship auto pilot informed. The planet was called phatterlean, the third planet in the solar system, just like theirs.

He was here, the home of the invaders.

The planet was similar to his, atmosphere consisting of equal composition of oxygen, hydrogen and wait.... carbon?

So this was the problem, the creatures where parasites, they had infected the atmosphere by excreting carbon. He carefully concealed his space ship in the brown bushes and turned on the element analyzer.

'There is more carbon content in the air than required for survival, the oxygen is depleted,' he observed, making a note on the notepad.
'The soil is red,' he noted down, 'Definite mixture of isotopic thorium, the radioactive element.'
The nuclear pollution, so this is what the flaw is. These creates are parasites, they first establish a planet and consume the natural resources. They take over God on the planet, destroying everything in sight. They reproduce and consume the natural resources. Their excreta was contamination, excreting carbon, radioactive isotopes and other dangerous elements.
After destroying the planet, they move to a different planet repeating the same process, it is survival for them. They need to live, so do we. He thought.
Obviously, they are also a silicon based compound just like us, that means they can be killed. Their weapons of war possibly are the weapons that act of collision, the combination of dangerous elements like carbon, iron and acidic compounds like sulphuric acid, they also harness radioactive weapons of thorium. The creatures use some alloys of iron and steel, they clearly do not know the elements that cut through them.
They are ignorant of the true nature of the elements and believe in controlling and modifying them. This would be their biggest weakness for we have better understanding of the elements.

He quickly moved over the planet, slowly observing the destruction and torment of the nature. Obviously, nature has marked the entire species for doom, there would be natural calamities following weaking them. This could again be used them, with the information of elders about the nature they can be completely weakened from inside.

This battle was winnable after all, the aliens were not as powerful as they thought they were. The smile on his face returned, he carefully prepared for the return trip. The journey would not be as sad as he projected. If his clock was correct, he would return back sooner than expected.

As he was preparing for his return, a small creature approached him,
'Who are you?' it asked. She was possibly an female offspring of the aliens.
The words were similar to the language used on our planet. He smiled, the emotion still common in these two words.
'Here have some cookie,' she said smiling.
Cookie, a compound made of flour, chocolate and milk. These creatures also modify other creatures private liquids, how sick.
'My parents are not here, they have gone to find us a new home,' she said to him, 'I do not want to go. I love this planet earth, why can't we stay here forever?'
Planet earth, so this is what the planet is called. Smiling at the little offspring, he sat into his space shuttle. What creature leaves their offspring with no resources for survival? Why did God create such horrible creature that it had to erase its own existence?

He won't let it happen to his planet, the creatures would be drawn away and defeated. His offspring would have a better world to live. Sorry to the little creature who offered him cookie, if it was not for her parents, he would never have to attack them. The twelve elders always guided the planet to enhance and not destroy.

Finally leaving the atmosphere, he smiled. There was hope after all, this planet was marked for extermination by nature, all they would do is enhance it and use it against the creatures.

The war would be won, but sadly, not for planet earth. They will pay for the crimes they have committed against nature, the offspring would pay for the sins of their elders. They have too.

Because, they started it.

P.s. Thorium is the modern fuel used by China currently to build nuclear reactors and now seen as the cleaner nuke available. Is it?