There is a 27% Aarakshan (Reservation) for intelligent thoughts in the Brain. Most of it goes vacant.

Reservation is a funny thing, everyone wants it, everyone fights for it and after standing in the line for 2 hours to get the caste certificate, after proudly getting admission in the most premiere college in the state for 10% less than cutoff and after carrying the responsibility of 300 years of misery and slavery of the entire tribe, the candidate walks the shallow halls of a professional college, only to realize, he was hoodwinked.

His entire caste told him this was the path to success, the sure-shot way in which the upper caste earned money but here, there is nothing. Nothing at all, shallow halls that remind him that he was nothing compared to everything in place. When it comes to earning the right, there was no caste system. Everyone was and is miserable.

For a hero to be a hero, we need to first find out who is the villain. 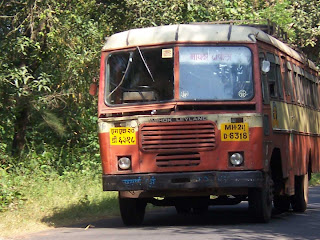 On a nefarious Saturday my destiny provoked me to take the journey from Pune to Mumbai in a ST bus. Now for those who are unfamiliar with the history of ST bus, they say it was first invented by the Devil himself to give a tour of hell to the new comers. The torment of seeing was a bit bearable by the torture incurred by the mode of transport itself. But then the bubble of the evil industry burst and the credit rating of hell fell, so finally the devil had to sublease it to Maharashtra and thus the evil instrument came to the biggest state of the country (namesake).

Now, why would I choose such a horrible means of transport? For one reason, I woke up late and missed all the decent (travelling by 6:15 train, jam packed with crowd and eating unhealthy vada-pav at lonavala) mode of transport and I couldn't wait for the luxurious yet costly volvo bus. So the best (or should I say worst) option chosen by my inferior mind was the ST bus.

Early morning, I had just consumed the dirty muddy water, which the vendor convinced me was tea for 3 Rupees. After cursing the man for spoiling my taste I climbed the over crowded bus and realized one hard fact of India, it is too much crowded. Hoping that Abhishek Bacchan would have a better chance at population control over terrorist, calamities and public welfare division, I, using the agility of a commuter, grabbed the second last seat near the widow.

It was around 10 minutes later, a man walked towards me,
'It is my seat, I have reserved it....' he said.
I was pretty sure, this bus was not the reservation kind of bus, 'What? Excuse me?'
'This is my seat, don't you have manners? You are occupying my seat....'
'Excuse me, how is this your seat? This is not a reservation bus, this bus has finders keepers system, you keep the seat you find....'
'You won't agree...' he lunged forward and pulled a dirtier-than-the-car-wash-cloth hanker-chief from the seat and pushed it on my face. It was smelling.
'This is my hanker-chief, I threw it on the seat from the window, this is my seat...' he claimed.
I stared at him in disbelief, then I stared at the hanker-chief in disbelief and finally I turned at the seat and burst into hysteric laughter.
'You find this funny?' he asked looking at me. I really though this was some hidden camera gag played on me.
'You mean, you are serious? You dropped in a hanker-chief from the window and now this is your seat?' I asked making a straight face and trying to control laughter.
'Yes, I am serious....'
'So if, hypothetically, you sit here with your wife and I throw my hanker-chief on her... would that mean, hypothetically....' I let him complete the sentence.
'Why you....' he started gearing up, ready to fight but the moderator of it all, the bus conductor meddled in and sounded the ultimatum, 'Stop this bickering or get down...'

It was funny to note that despite the seat next to me was empty, he did not occupy it, nor would he let his wife occupy it. Oh well, I enjoyed the rest of my journey watching the scenery on the rain washed country side of Pune.

Just so you know, I have reserved your place to comment on this post, do not let it go waste.

Its friendship day today and with great friendship comes great responsibility of picking up the hotel tab, do not forget, Happy Friendship Day.