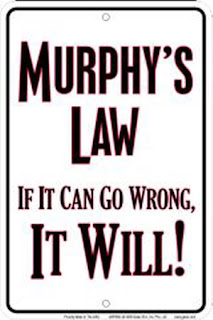 The problem with life is, Karma is watching and has a infra red sensor, a motion detector and a more sophisticated technology to spook you out. Usually Karma and Murphy have each other on speed dial and conspire together to bring you down.

It always pays to be in a secular country where all the religions are respected. Specially when Ganesh Chaturti and Id come back to back as if in a race to reach human race. We on the other hand enjoy the two days holiday (much to the dread of entire management) but they end on Thursday and before you want to get yourself soaked in a knee deep in holiday mood there is one final dreaded Friday sandwiched in between the holidays and the weekend.

The Friday smirks, come back to me, let me spoil your mood. Let me give you a lot of work load to the extend that you will be brought back to reality and spoil one holiday mood and prevent you from entering into another. Oh wait, and if I am not enough, the other brother Monday is waiting for you on the other side of the weekend.

And here I thought, Friday was our friend.

Anyhow, so here I was feeling really stupid working on a Friday because anyone who was smart had applied for a leave on Friday and was enjoying in some paradise in some place far far away a super weekend of 5 days, apparently that was everyone but me. Now, in my defense, I didn't realize Wednesday and Thursday was a holiday and by the time my slow brain caught up, most people had left for home town and it was impolite to apply for holiday at the last moment.

So in between two big weekends, I finished my work early on a Friday and decided to head home early. My devious plan was to head for the favorite watering hole and have a small pint (yeah right!!) of water (wink wink) then maybe haunting a few local Ganesh Mandals and eat free prasad (which if eaten in more than 15 places is sufficient for dinner) and finally, head home in the cosines of the bed, the beep of my android and The secret of Nagas by Asmish. If only life would happen as planned, I should have been the number one evil scientist by now.

Yes, the plan was not just ruined it was shaken, stirred, beaten and mixed like some frizzy cocktail and gulped down by karma in one bottoms up. You know its your Karma catching up when your devious plan of going home early are foiled by a little pin piercing your bike tire at the strategic location on the way

Today, I was leaving home early before the sun had set so I finally saw the traffic on the street and decided to take a shorter route (read: A route which I used my telepathic eyes to see and I guessed it would open on the other side of the street) to my destination. Driving on this new route, I saw a cow, a dirt biking track (naturally formed and artificially nurtured by the PWD department) and finally a narrow lane entering into a farm....oh wait, did I say farm? It took exactly 79 secs to realize I had lost my way and this was nowhere leading to the 'so-called' destination. It was a dead end and a dirty one.

I decided to trace back to the source and lo and behold, in the excitement of having something new in its life, the Tyre of my bike hissed a sigh of relief and released all the pressure build up inside in. A flat tire in the middle of nowhere.

To my delight (or horror) a local idiot (possibly) walked towards me,
'Flat Tyre?' he asked.
'Duh uh...,' I had the urge to answer, No I like walking in the mud carrying my bike in my arms.
'Its a pity, these roads are not clean at all, we try hard to clean it but you know... sigh,' he replied walking parallel to me.
Pissed as I was, he kept talking. The only thing giving me strength was the poem of Agneepath I kept reciting in my mind as he walked with me.
'You don't look around this place, are you new here?'
Well clearly this problem was not going to go away, so I politely said no, then I shamelessly mentioned that I took a wrong turn and landed here. 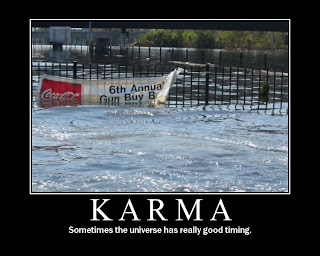 'Oh so you took a wrong turn,' he repeated after me, reminding of my stupidity.
I gave him a nasty look and kept pushing.
'Its sad, how you intelligent people keep doing such mistakes, we illiterates are more wise.'
No comments there wondering, when will he leave me alone. After about two minutes of awkward silence.
'Why are you going that way? You should take the left turn behind to reach the highway.'

I turned back, the left turn was a little distant behind me. I had crossed it 5 mins ago, curiosity pipped in my mind as to why he didn't tell me 5 mins before. He shameless smiled and walked away, making me feel stupid in the middle of the muddy road.

As I turned to leave the dreaded place and connect to the highway, the man walked by throwing some nails as casually as he threw groundnuts there.

I kept mumbling the poem of Agneepath and pushed my bike. The plan had foiled and I reached home at the normal time, the sun had set and I never got to do the things I was going to do. Karma 1. Me 0.

Now time for a rematch.