Are we there yet?

Or even, why can't I go to school on my cycle? Bus is so boring. Grow up, grow up grow up. To which I would finally say, ok, I want to grow up, grow up. Now, twenty five years on the planet and I ask myself is 'are we there yet?' is this what it is to be grown up? Oh well, it sucks. Now can I go back? Apparently I can't.

Now, if you think about the average active partying life of adult male as fifty, after which you probably watch television late night on new years eve, you can say I am half way there. Now obviously, as I mentioned last year, twenty five is the time when your standing male life starts disintegrating. Twenty Five is the time where your parents want to see you get married and when every girl you have known from your class, is either married, pregnant or engaged or lesbian and chances of you hitting the singles bar are slim. This is not America and there is obviously no singles bar, the choice you face here is either Chandni bar (if you want to spend the rest of life alone) or Club Mando (if you are hunting for a soul mate) or the local Madras Cafe (If you want to find a Savatri for your mom)

When you are twenty five, people have a different way of looking at you. They stare at you when you are watching Ben ten on television or they utter the world tsk tsk tsk, if you sleep late. The heavy hitter words like 'Responsibility, working hard, karma' are uttered everywhere. The toothless Aunty smiles shamelessly when she asks you if you have a girlfriend, making you awkward whether she is asking or telling. Or suddenly you find your dad asking your blog name to give it to some distant relative who wishes to know you more. Mom as usual disagrees with any girl you bring home, because she is not from your community and suddenly, long lost, distant forgotten relatives start calling your parents to know what is the status as if you are distributing free lottery.

When you turn fifteen, you spend a lot of time hunting for a perfect folder hiding software on windows to hide your dirty secrets from your parents. Surprisingly, now that I am twenty five, I find those dirty secrets lessen over the time, when the brain says, bro move on, now that you are hitting boundaries, don't catch the ball sitting in the audience.

But then again, in childhood, you were worried about parents finding out the bad marks or teachers remarks, in your prime teens it was your dirty secrets, now you are worried, your parents might find your stuff. So the worrying is there, only priorities have changed.

Now actually I stand on the threshold of manhood, where I won't be qualified as a teen and my stupidities won't be excused. I will have to pay the fine for doing the right thing, which is carefully concealed as tax and added as a civil responsibility. My hard earned money will be robbed by the government into one of their another bofors scandal and I would feel proud of it. And now, I realize that a marriage certificate is more important to earn the respect in the society of strangers (whose approval apparently I need for God knows what reason) than my engineering degree certificate (if I knew this long back, I would never join engineering) and if thats not all, life is coming on you faster than the rabbits can make babies.

But then again just like my android, there is always a better and newer app out there and the problem is, I have limited space to install them all. 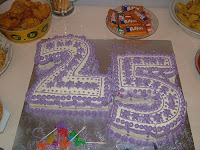 Finally, now that I am halfway through, I think I did pretty well, and I think I deserve a standing ovation for making it up so far. Taking a bow, I stand straight, take a deep breath, smell the fresh vintage wine, put myself in top gear and silently say to life,

Happy Birthday Me. Twenty Five not out.