January 31, 2011
Have you ever been told to run towards the end of the cliff and trust a giant kite hold you high up against gravity? I was told this weekend. Sadly, the words look before you leap proved fatal, as the valley was over 4 feet deep. This weekend, our bikers group, decided to kick off the first ride of 2011 out of the world, just, we didn't realize it would be literally. We jumped from a mountain and hung in the middle of the air.... I meant para-gliding. 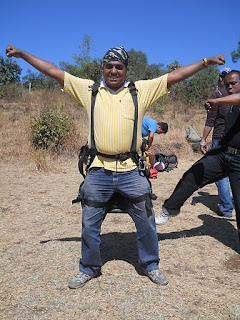 I should be honest, I was dead scared, I mean scared more than I ever was. The thing is, I have survived into a lot, bike crashes and even bomb blasts but this, this was the scariest. In the crashes or the blast, I was not aware what would happen in next few minutes, but this was different. I had to run towards the end of the cliff, take a leap of faith and let God lift me up. The scary part was, I never believed in God, but in that one second, I just hoped I was wrong.

In the beginning the glider refused to lift off, increasing my anxiety and fear and slowly pulling me to the edge of the cliff. 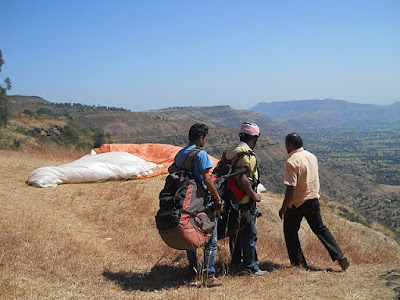 The man started cribbing about me being overweight and many attempts by him failed to raise me higher. I even asked him, if I can close my eyes while running and he started assuring me that its nothing to be scared off, yeah right, tell that to a man who is 40 feet above the ground.
To pass time, I asked them if we have a safety plan like a parachute or something, a bad idea because he laughed at me and said, this is a small jump, by the time you open the parachute you will crash land in the valley below. Do I have to tell you what was my reaction? He was packing something in his backpack and I had a tinnie tiny hope that it was a parachute but no, apparently it was a bag to fold the glider if we crash land, yes he said crash land in the valley below.
Now, physics tells me that one square inch of a drag is going to reduce my speed by 10% here the kite was a lot bigger, so chances of me falling and breaking my head were 0, but you know at that moment, this probability refused to come in my head and the only thing that I could see was the deep valley below. 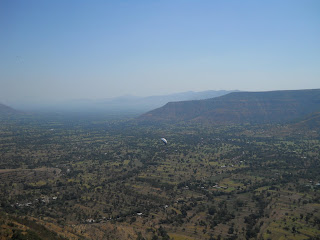 But then finally the winds changed and another rider took over. In just five minutes, my legs were above the ground and I was up there in the air, doing a superman without underpants above my pants.
When I was up there, I just thought of one thing... perspective. If only you could see what I saw from up there. The endless weightlessness, the basic law of universe, gravity, broken and a feeling of eternal bliss. There in the wee moments in the air, I felt closer to the essence of the universe. As the old alchemist would say, I was in rubedo stage for magnum opus, the perfect unification of limited to the unlimited. I had taken a blind leap of faith into the universe and it did not let me down. 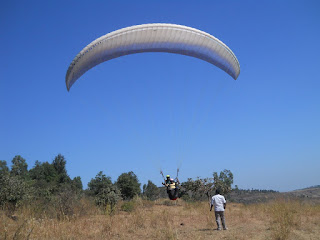 After some time, reality dawned, and Newton woke up, what goes up, comes down and I had to land back on the mountain cliff. Walking seemed so boring after this experience.
I learned one thing from this experience, take that blind leap of faith and let the universe lift you high up.